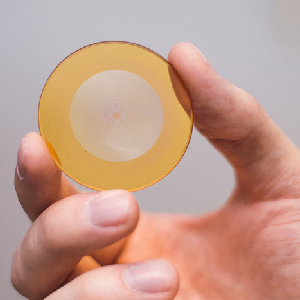 10.08.2018 2018-08-10 2018-08-22
IEEE Journal of Selected Topics in Applied Earth Observations and Remote Sensing (IEEE) published the article of the group of scientists of Samara National Research University. It describes the work on the creation and use of ultralight diffraction optics for obtaining high-resolution images.

In this paper, the technology of manufacturing of a 256-layer diffraction harmonic lens and the algorithms for reconstructing the obtained images are described. This optical element, created by the research group of the Department of Supercomputers and General Informatics of Samara University, weighs only 5 grams and replaces a complex and massive system of lenses and mirrors similar to the one that is used in telephoto lenses with a focal length of 300 mm and a weight of 500 grams. "To solve the problems in the areas where there is a constant struggle for the reduction of the weight and size of the optics, such massive systems are not suitable. First of all, it concerns compact systems of Earth remote sensing set on small-sized aircrafts, i.e. UAVs, atmospheric probes and nanosatellites. Ultralight diffraction-optical systems weighing only a few grams open up new possibilities for them", – says one of the authors of the scientific article, Professor of the Department of Supercomputers and General Informatics Artem Nikonorov.
Modern heavy photo and telephoto lenses need a large number of optical elements (12 and more) for the compensation of image distortions that take place due to optical aberrations. The scientists, when using an ultralight harmonic lens, proposed to compensate for such distortions with the use of digital processing. The computational reconstruction developed by them for these purposes includes colour correction of the image and elimination of chromatic blurring using convolutional neural networks (CNN). The results of the testings conducted by the developers showed that the quality of images restored in this way is comparable to the quality of images obtained from consumer cameras and mobile phones.
The time for reconstruction of one image based on the CNN is about 1 second.
On the basis of the described approach, Samara University scientists have already proposed a technology capable of providing a resolution of 18 m for surveying the Earth's surface from a nanosatellite. While the optical systems on the market provide a resolution of 40 m.
In addition, the use of an ultralight harmonic lens and image reconstruction technology based on the CNN enabled scientists to increase the PSNR (Peak Signal-to-Noise Ratio) to 26 dB in real images.
"Five years ago obtaining a high-resolution colour image using a diffraction lens seemed a distant goal. However, the results of our studies have shown the promise of using light diffraction optics, – noted Artem Nikonorov. – The fact that our work has been published by the authoritative journal IEEE, which has a Q1 quartile in such fields as “Space Sciences” and “IT in the Earth Sciences”, suggests that international experts see a great future for this direction".
In the future, the research group of Samara University is going to continue the work on overcoming strong aberrations in the images. To solve this problem, they plan to improve the technology of manufacturing ultralight lenses as well as image reconstruction methods and improve the performance of neural network reconstruction.
For reference
When manufacturing a 256-level diffraction harmonic lens, a photosensitive substance – resist – is applied to the surface of silica glass. Its thickness is 7 microns (for comparison, the thickness of a human hair is 40-90 microns). With the help of a laser beam a 256-level relief is drawn on the resist. An ‘approximation’ of an object happens with its help. The production process of one lens takes about half an hour. The compensation of distortions is provided by the digital processing of images on the basis of extremely-precise neuron networks”.
Share
Facebook Twitter VK OK