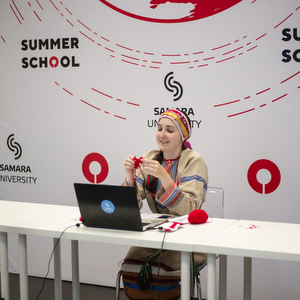 07.08.2020 2020-08-07 2020-08-11
August 6 at the Boiling Point of the Samara National Research University the closure of international summer online schools took place. 52 students from 26 leading foreign universities in Australia, the UK, Germany, Honduras, Greece, Indonesia, Spain, Italy, China, Malaysia, Mexico, the Netherlands, Peru, USA, Finland, France, Chile, Switzerland, Japan for two weeks studied one of three educational programs: the Russian language and culture, high technology management and international law.
The restrictions imposed by the coronavirus pandemic did not prevent traditional summer schools, but also contributed to the new project - Samara University international summer schools in online format. The school program included lectures and excursions. In 2020, 2 schools "Russian Language and Culture" were implemented in two stages from July 2 to July 16 and from July 20 to August 2, also from July 23 to August 6, the programs "High Technology Management" and "International Law".
The format of distance summer schools consisted of two blocks: an educational part and a cultural program. The full-time educational process was organized on the BigBlueButton platform of the Samara University at the Boiling Point and included lectures and practical classes in English with teachers from Samara University and leading researchers of foreign universities and international organizations. Within the framework of the summer school "Russian Language and Culture", classes in the Russian language were organized in groups depending on the language proficiency level; the final certification of students were projects developed on the basis of knowledge gained during the school. As part of the high-tech management program, 11 lectures were held, at the end of which students completed test tasks. For two weeks, the participants of the International Law School were actively conducting research, the result of their active work will be the publication of a collection of articles on the results of the summer school.
After completing the educational part, the participants joined online walks around Samara and got to know the history and life of the city, sat in the cockpit thanks to a unique remote excursion to the training airfield of Samara University and visited the of the History of Aviation and Cosmonautics Museum named after academician S.P. Korolev. The most interesting and memorable moments of the cultural program were an online culinary master class, where each participant together with a team of school organizers prepared Russian pancakes and Olivier salad, a master class on making Russian folk martenichki dolls, which became a souvenir from Russia, and games in a remote format ...
The completion of each summer online school was the summing up of the course and the presentation of electronic certificates with a credit of 4 points according to the European system for assessing the development of educational programs ECTS.
Summer international schools are organized by the Center for International Short-Term Educational Programs of the Institute of Economics and Management, Samara University. Summer international schools for foreign students have been implemented annually since 2015; in 2020 the programs were held in a new format of distance learning and excursions.
Share
Facebook Twitter VK OK