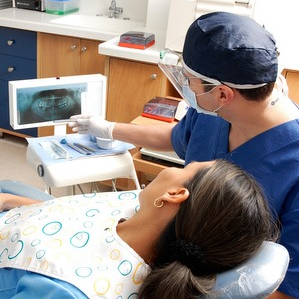 The results of research project was published in Diagnostics Journal

25.11.2020 2020-11-25 2020-12-21
The method of express diagnostics of early periodontitis was developed by a research team with the participation of scientists from Samara National Research University. According to the authors, the new method allows exposing a dental disease without interfering in soft tissues around the teeth. The article was published in the international Diagnostics journal.
Periodontitis is an inflammatory disease of the oral cavity that can damage the gums, as well as the roots of the teeth, and cause dental decay. According to the researchers, the initial signs of the early inflammatory process often go unnoticed, but it is the period that the disease is treatable.
The acute symptoms of disease include redness, swelling of the gums, formation of pockets requiring surgical intervention, such as closed and open curettage of teeth (scraping of periodontal pockets, – Ed.). Besides, periodontitis is accompanied by teeth mobility, which most often occurs when teeth can no longer be preserved. Chronic periodontitis is the most common dental disease in people older 30 years old (60–65%), researchers noted.
According to them, the science of today focuses mainly on changes in soft tissues or the oral fluid. These signs appear at later stages of the disease. Therefore, timely diagnostics and prevention measures are important when treating patients with periodontitis.
To identify periodontitis at early stage, it is necessary to know which structural changes occur in dental tissue. The researchers used the Raman spectroscopy to detect the main spectral changes in dental tissues in periodontitis – such as changes in the water-mineral metabolism or collagen synthesis, the research team said.
According to Yelena Timchenko, Deputy Scientific Director of the Research Laboratory of Tissue Engineering and Associate Professor of the Department of Laser and Biotechnical Systems at Samara University, this method allows to use a compact spectrograph without any direct contact on dental tissues.
“Diagnostics of spectral changes in tooth enamel, as well as an algorithm, we have developed to verify enamel in periodontitis, allows to identify at-risk patients and change their therapy regimen using allogeneic hydroxyapatite (biomaterial of natural origin, – Ed). Sensitivity and specificity of the developed algorithm were 95.5% and 95.35%,” Timchenko said.
In the future, the researchers is planning to create an express device for non-invasive diagnostics of periodontitis for application in dental clinics.
The study was carried out with the participation of specialists from the interuniversity research laboratory of tissue engineering at Samara University and Samara State Medical University (SamSMU), as well as heads of “DIAMANT” and “Academy of Dentistry” dental clinics in Samara.
Source: ria.ru
Photo: pixabay.com
Share
Facebook Twitter VK OK