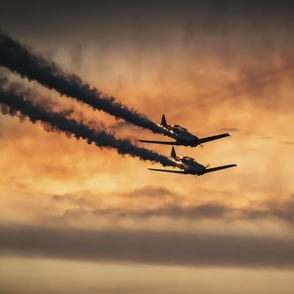 18.05.2021 2021-05-18 1970-01-01
Studies by scholars of Samara National Research University will help create more environmentally friendly aircraft engines with lower levels of carcinogenic emissions into the atmosphere (*).
Active development of air transport leads to constant pollution of the atmosphere with various chemicals – carbon oxides, sulfur, nitrogen, as well as hydrocarbons. Emissions from aircraft engines threaten human health, as well as the environment.
"Combustion products of hydrocarbon fuels are known to have carcinogenic activity, as they contain polycyclic aromatic hydrocarbons (PAHs), which can cause cell mutation and cancer in living organisms. Therefore, the task of identifying the mechanisms of PAH formation during fuel combustion remains quite relevant in the development of new aircraft engines – designers calculate and simulate combustion processes, trying to reduce the level of harmful emissions including carcinogenic ones", - Sergey Matveev, senior researcher at the Scientific and Educational Center for Gas Dynamic Research (REC GDI-209) of Samara University, said.
The fuel for aviation gas turbine engines is kerosene, which consists of dozens or even hundreds of individual hydrocarbon components. For aircraft engine designers to compute and predict the levels of harmful emissions in advance, scientists create "lightweight" fuel mixtures that reproduce indicators of actual aviation fuel, most important from the point of view of ecology. Such mixtures are called surrogates.
"Quite a number of aviation kerosene surrogates have been developed around the world – this train of studies is quite popular abroad. But, oddly enough, very few surrogates among those developed would help predict the level of emissions carcinogenicity. Besides, foreign PAH surrogates are not very accurate – their indicators are sometimes ten times different from the data of real fuel", - Matveev said.
Samara scientists have chosen TS-1 kerosene (Jet-A is its foreign equivalent), a fuel widely used in civil and transport aviation, as the basic real fuel. In the course of studies and experiments, scientists have developed a detailed kinetic mechanism that includes formation pathways for carcinogenic PAHs and nitrogen oxides and consists of 597 substances and almost 12 thousand reactions.
As a result, two options of kerosene surrogates were created and tested, which best reproduce the characteristics of real jet fuel, as shown by their tests. According to such test results, Samara surrogates appeared to be about an order of magnitude more accurate than their foreign counterparts in terms of compliance with certain properties of real aviation kerosene.
"The concentrations of combustion products obtained by burning surrogates and aviation kerosene of the TS-1 brand were compared. Both surrogates showed good consistency with the real fuel in their main components of complete combustion, the maximum deviation not exceeding 20 % in carbon oxides and unburned hydrocarbons", - Sergey Matveev noted (**).
Surrogates developed at Samara University can be used in design offices at the stage of designing and fine-tuning combustion chambers of aircraft gas turbine engines to improve their environmental characteristics and reduce carcinogenic emissions into the atmosphere.
________________________________________
* Studies were carried out within the framework of the project "Development of aviation kerosene surrogate to assess emission of polycyclic aromatic hydrocarbons by civil aviation engines". This project was supported by the Russian Science Foundation (RSF), to become the winner of "Initiative studies by young scientists" competition under the Presidential Program of research projects implemented by leading scholars, including young scientists. The program was developed on behalf of the President of the Russian Federation to promote formation of an advanced sector of internationally recognized fundamental and exploratory studies in Russia and support the best Russian scientists.
The winner of this competition under the Presidential Program was also the project by Anna Savchenkova, a senior researcher at the Scientific and Educational Center for Gas Dynamic Research at Samara University, "Creating a model of soot nuclei formation via dimerization of PAH molecules". The study carried out within the framework of the project will enable forecasting more accurately the formation of soot nuclei when combusting hydrocarbon fuels, and solving consequently many environmental problems. Results of the study were reflected in publications in the world's leading scientific journals, including the Physical Chemistry Chemical Physics (PCCP) belonging to the Q1 quartile.
** Results of scientific research are reflected in the articles Study of the formation of polycyclic aromatic hydrocarbons in the combustion chambers of aircraft engines and Experimental study of the combustion of surrogates of aviation kerosene TS-1, published in the well-known series of collections of articles of the American Physical Institute AIP Conference Proceedings.
Photo: pixabay.com