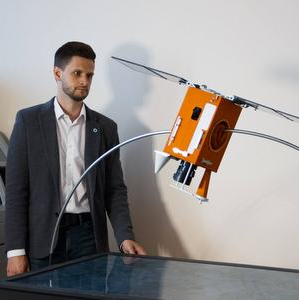 19.07.2021 2021-07-19 2021-09-13
The anniversary XV International Aviation and Space Salon starts in the city of Zhukovsky on July 20. Visitors to the FUTURE HUB pavilion – Academic Science and Aeronautical Technical Creativity of the Youth – will be able to see a number of models and full-size prototypes representing the advanced developments of scientists of the Samara National Research University.
One of the central places in the exposition will be occupied by the model of the AIST-3 small spacecraft (SSC), which continues the line of small satellites of the AIST family created as part of the cooperation between scientists from Samara University and engineers of the SRC Progress. “Many years of orbital operation of the first and second generation small spacecraft of the AIST family confirmed the validity of the adopted design solutions and proved that AIST is a reliable and versatile platform that can serve as the basis for the creation of a line of inexpensive spacecraft for solving a wide range of tasks.
The third generation of AISTs will effectively complement and expand the capabilities of our orbital constellation. AIST-3 is almost twice as light as its predecessor. It will become the basis for a series of small spacecraft capable of solving the issues of monitoring the Earth's surface and providing broadband Internet access, as well as for conducting experiments in space. The platform is planned to be equipped with a propulsion plant running on "green" fuel (hydroxylammonium nitrate). With a mass of 225 kg, such a satellite can "take on board" up to 100 kg of payload," said Ivan Tkachenko, Associate Professor at the Department of Space Engineering.
In the format of a remote Earth probing spacecraft, the AIST-3 small spacecraft will allow obtaining images of medium spatial resolution in the visible near-infrared ranges of the spectrum with a resolution of at least 5 meters in the visible range, 10 meters – in the multispectral range, 30 meters – in the near-infrared with a 60 km capture bandwidth. Filming in the near-infrared range is provided due to diffraction optics. Due to the VHF-range radar, AIST-3 is capable of detecting subsurface objects covered and camouflaged by vegetation, as well as monitoring water transport and controlling the location and parameters of ships.
In addition to small spacecraft, the exposition of Samara University includes other developments in the field of aerospace technologies. For example, an unmanned air mobile laboratory complex is capable of autonomously flying around a territory along a given route quickly analyzing the state of the atmosphere at given points and immediately reporting the results to the control center. The complex is based on a compact gas chromatograph developed at the Department of Chemistry of the University. It is mounted on a copter also created at the University’s Center for Unmanned Systems.
The exposition of Samara University will also introduce units and parts of gas-turbine aviation engines created by using 3D printing technologies. They include: nozzles of a 1st and 2nd stage gas-turbine engine, a burner unit frame made by selective laser fusion, a flame tube of a small-sized gas-turbine engine, a small-sized gas-turbine engine in section view, unified removable double-circuit burners. The use of selective laser fusion methods has allowed to significantly reduce the production time and costs.
The installation for demonstrating the operation of a vibration isolation system based on metal rubber (MR) material will show how resistant the MR material is to shock loads. Originally, the unique material that combines the strength of metal and the resilience of rubber was designed for being used in space. It allows mitigating the overloads affecting sensitive equipment when placing satellites into orbit. Presently, MR is widely used in the terrestrial industry. Metal rubber is used to increase the anti-vibration reliability of parts and systems of various products in propulsion engineering, mechanical engineering, machine tool building, shipbuilding, energy, radio-electronic, oil, gas, and food industries, in defense technology and medicine. MR is actively used for the needs of Russian Railways as well.
Also, within the framework of MAKS-2021, there will be a number of events with the active participation of scientists and engineers of Samara University.
Participation in the International Aviation and Space Salon allows Samara University to develop cooperation ties, conclude lucrative deals and negotiate future mutually beneficial joint projects with Russian and foreign developers and manufacturers of aerospace technology, build cooperation with other leading research and educational centers.
Photo: Daria Aksyonova
Share
VK OK