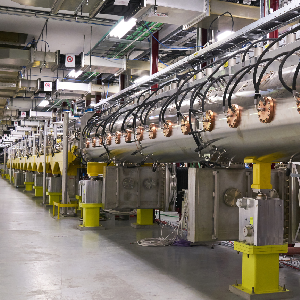 21.08.2020 2020-08-21 2020-08-24
In the course of a joint project between CERN openlab and SmartLINAC Samara University, modern artificial intelligence systems will be used. This is reported in the twitter of CERN openlab - a public-private partnership, in which CERN (European Organization for Nuclear Research) collaborates with leading companies in the field of information and communication technologies and other research organizations.
"The goal of SmartLINAC, our new project with Samara University, is to develop a platform that will use artificial intelligence to detect anomalies in linear accelerators used in physics and health research," the report says. According to the material published on the official website of CERN openlab, artificial intelligence will also help to adapt the developed platform to different types of linear accelerators.
Samara University and CERN openlab signed a cooperation agreement in October 2018. SmartLINAC was the first project implemented in the framework of this cooperation and was born in the Department of Technical Cybernetics at the PhD student from Switzerland Yann Donon, who has been working at the university since 2018 under the guidance of Doctor of Technical Sciences Alexander Kupriyanov. The SmartLINAC coordinator is the head of CERN openlab, Dr. Alberto Di Meglio. Together with Yann Donon and Alexander Kupriyanov, Rustam Paringer, Associate Professor of the Department of Technical Cybernetics at the University of Samara, and Igor Rytsarev, PhD student at the department, are working on the project.
The SmartLINAC project offers an innovative approach to recognize and simulate the time and failure modes of linear accelerator systems, as well as to develop predictive and easy to implement maintenance plans based on nominal information about the average time to failure and operating conditions.
Linear Accelerators (LINAC) are a type of particle accelerators capable of accelerating charged particles to high speeds. Their current applications range from elementary particle physics research to cancer treatment, non-destructive material control, nuclear waste management, safety inspection or food sterilization. Typical medical or industrial linear accelerators are complex engineering systems and their performance, particularly in clinical settings, is strongly influenced by downtime, operating costs and lack of trained engineers.
Currently, the availability and distribution of linear accelerators for medical applications is limited by the complexity of such systems. Equipment costs, the lack of adequate facilities for immediate technical expertise, and the possibility of downtime that may affect patients' life expectancy pose serious challenges. The need for linear accelerators that are easier to maintain and operate medical systems was highlighted during a workshop organized by the European Organization for Nuclear Research (CERN), the International Association of Experts in Cancer Research (ICEC) and the UK Science and Technology Council (STFC) in October 2017.
Share
Facebook Twitter VK OK