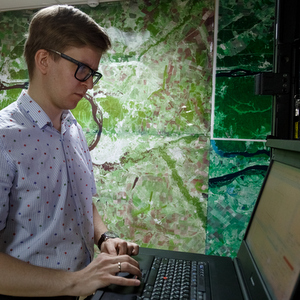 The range of the technology application is wide: from scanning space images to establishing the authenticity of digital documents

09.07.2018 2018-07-09 1970-01-01
Scientists of Samara University have developed a software product that allows checking the reliability of any image in a few seconds. This refers to both images taken from space satellites, and digital documents, and photos for gloss.
Fake images have become a big problem for companies which work involves checking and disseminating of information — first of all, the media, banks and insurance companies.
There are a lot of  types of visual distortions that are made intentionally: from geometric transformations in the picture and retouching to duplication of objects.
To determine the authenticity of the image, the team of scientists of the Department of Geoinformatics and Information Security of Samara University uses a certain set of software.
"When you get an image from an unknown or untested source, you need to find out whether changes have been made to it or not. It's easy to figure out with the help of our software, — says the project supervisor, Assistant Professor of the Department of Geoinformatics and Information Security Andrey Kuznetsov. —  This is especially evident when analyzing remote sensing images of the Earth (RS)". The photographs received from space vehicles are very large in comparison with everyday photographs taken with a camera or a mobile device camera. The software can find an "extra" detail  much faster than a human eye — for example, a new, artificially embedded into the image building or a cloud that closes important objects in the territory of the photographic survey.
"It is easy to check whether the cloud covering the object of interest (for example, the base in the remote sensing image) is "real" or not, — says the project supervisor. — We analyze whether the size of the cloud is changed, or it is completely transferred from another picture. We check the angle of the sun beam at the moment of shooting and compare it with the position of the shadow of the cloud in the image. Taking into account the information about the position of a satellite sensor and about its position in orbit in general we draw a conclusion whether the image area  you are interested in  is distorted or not".
In the photo the scientists can also find the duplication of objects. "We will illustrate the algorithm for finding duplicate areas on the image in the following way, — continues Andrey Kuznetsov. — The picture is broken up into small blocks, and the computer calculates a certain figure in each of them. Once all the data is calculated, a histogram is constructed that shows how many times the same figures occur in the image. If the figure occurs more than once, then most likely it is a fake".

At the same time, the developers claim that image analysis takes up to one minute in the most difficult cases, and in standard situations – only two or three seconds.
The use of such technologies saves time, since the need of going to the site to check or control the actual state of affairs does not exist.
The software package developed by the scientists includes many algorithms that are launched successively. Each algorithm is aimed at detecting a specific type of image distortion. Thus, the software developed by the team of scientists can also be used to detect forgery of digital copies of documents. For example, when analyzing a fictitious income certificate, the program configured for a certain type of distortion will instantly expose the offender: all graphic changes on the electronic copy will be clearly visible. "This can be useful for banks and insurance companies, since it will help to eradicate the cases when a person provides a scan of income certificate with an extra zero in the wage in order to obtain a loan, and then disappears with the received amount of money", — Andrey Kuznetsov provides an example.
The program will help to determine different sorts of fake certificates in digital format, required from law enforcement and medical institutions when applying for a job. Besides, the software product will give a clear answer —  whether the photoshop was used in glossy publications, or the image is undistorted by the numerous photo filters.
"We analyze what kind of attacks are used rather to change the content of the scene than the colour and light in the image. And this means that our program helps to expose false images, documents, and, eventually, fake events", — the scientists conclude.
For reference
One of the leading Russian scientific schools in the field of processing of remote sensing data (RS) and Geoinformatics was formed at Samara University. Scientific work in this direction is focused on the Department of Geoinformatics and Information Security, as well as in the Scientific Research Laboratory  of Geoinformatics and Information Security (SRL-55) and is implemented in partnership with the Image Processing Systems Institute of the RAS and OJSC "Samara-Informsputnik".
The work of the research team is aimed at the development and operation of geoinformation systems, as well as the creation of products and services based on the use of remote sensing data in such areas as urban planning, natural resources development and agriculture, cartography and navigation, transport and monitoring of natural disasters. Mobile applications and services of geolocation, environmental monitoring systems, damage assessment for insurance claims, real estate valuation, as well as assistance in natural disasters and others are created on their basis.
Profile departments and research centres are equipped with modern systems for receiving and processing of space information, information security complexes, as well as other special equipment.
Photo: Natalia Orlova
Share
Facebook Twitter VK Google+ OK