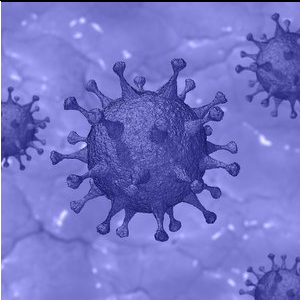 The model allows predicting situations that occur as infection spreads

23.03.2020 2020-03-23 1970-01-01
Scientists at the Samara National Research University and the Autonomous University of Barcelona have developed a mathematical model of dangerous viral infections outbreaks. The article (1), published in the journal of the American Institute  Mathematical Biosciences and Engineering (MBE), is devoted to the development. The publication discusses various aspects of the spread of infections among animals, but, according to scientists, this model can also be applied to human infectious diseases, including coronavirus.
The model takes into account many factors and constantly changing data, including, for example, mortality and birth rates, absence or presence of immunity after recovery, reduction in food supplies, as well as the phenomenon of “imaginary extinction”. The dynamics of processes is described by interconnected systems of differential equations. In their studies, scientists made a special emphasis on mathematical modeling of critical situations that arise as the disease spreads in population. The model also demonstrates the possibility of uncontrolled development of events in case of explosive virus outbreaks.
“Two different processes can be distinguished in the spread of a viral infection. When it comes to the development of a disease within one organism, there may be a phenomenon of“ imaginary disappearance ”when it is not possible to detect the causative agents of the disease simply because the time it took to take the biological material for analysis - for example, blood, plasma, tissue - corresponded to a period of imaginary disappearance. It corresponds with the fact that some people who were considered to have recovered from coronavirus, after some time they recurred the disease and, - said Elena Shchepakina, a professor at Samara University, “The second process is the spread of infection in a population where individuals are susceptible to disease, and it doesn’t matter whether it is a population of microorganisms, animals or people. One of the features of our research is the analysis of critical parameter values ​​and modeling of critical phenomena. "
According to the professor, the concept of the critical regime and critical phenomena can be clarified using an example from the theory of combustion. The combustion process can proceed smoothly and safely, but when the combustion parameters change, when they go beyond the permissible values, this process can acquire a very dangerous character, accompanied by the so-called thermal explosion.
The critical mode separates the modes of dangerous and safe combustion. It is for modeling such phenomena that special mathematical objects such as “duck paths” and their generalizations - “duck cascades” and “black swans” are used,” Shchepakina said. “With regard to the viral infection distribution model, which was proposed and studied in our article, this means the fundamental possibility of uncontrolled development of events. Therefore, we believe that no precaution in the current situation on coronavirus can be can be unnecessary."
As Shchepakina noted, the scientific work published in the MBE is part of a series of articles written by scientists at Samara University on the topic of mathematical modeling of biological processes. The theoretical foundations of these applied studies are presented in a number of monographs published by well-known scientific publishing houses both in Russia (“Science” and “Fizmatlit”) and abroad (Springer and SIAM). Samara scientists are also the authors of the imaginary extinction hypothesis put forward about 15 years ago, concerning changes in the populations of microorganisms.
“We put forward a purely theoretical hypothesis, the essence of which is as follows. In some microbiological communities, a phenomenon that we called the effect of imaginary extinction might occur: the population of microorganisms can decrease to disappearingly small sizes, and after some time its size grows, moreover, in an explosive way , while the time intervals corresponding to the imaginary extinction can exceed the intervals at which the population is significant in size, by several orders of magnitude," Schepakina said.
Well-known microbiologist Professor Michael Prentice, who headed the department of medical microbiology at the National University of Ireland, approved of this hypothesis. "He drew our attention to the known data on changes in the population of marine phages, which fully confirmed the validity of the hypothesis. The first work on this topic was published in collaboration with Michael Prentice, after which several more articles on this topic were published, and just the other day we received the message that another article will be published in a special issue of the Australian and New Zealand Industrial and Applied Mathematics Journal, which will be dedicated to the anniversary of Graham Wake, a well-known specialist in mathematical modeling of infectious diseases of the New Zealand Massey University "- Shchepakina said.
Share
Facebook Twitter VK Google+ OK