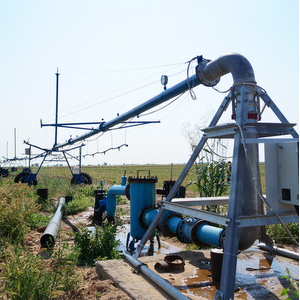 01.06.2020 2020-06-01 1970-01-01
Scientists at Samara University have developed a control system for a smart sprinkler. Thanks to this system, a mobile land reclamation complex is capable of independently analyzing the state of the soil while moving across the field, evaluating the degree of its moisture and the presence of necessary mineral fertilizers. Depending on the data received, the irrigation machine regulates the intensity of watering and fertilizing by itself.
Currently, there is a technology for determining the relative humidity of the soil by analyzing hyperspectral images in the SWIR range (short-wave infrared range). However, with this technology, the survey is carried out mainly from the satellite, because due to the high cost of the SWIR range of matrices, their installation in ground devices is not economically feasible. Thus, it is impossible to obtain operational video data. Therefore, scientists at Samara University proposed to install a compact imaging hyperspectrometer developed at Samara University weighing only 1 kg directly onto the irrigation machine, and instead of using expensive SWIR matrices, use conventional CCD matrices (photosensitive matrices for visible light). The basis for the creation of such a hyperspectrometer was an optical scheme with a telescopic system and a complex diffraction grating, which allows one to collect a hyperspectral image of the area with 20-40 spectral layers.
The project to create a sprinkler control system was implemented by order of the Russian Research Institute for Land Reclamation Problems of the Russian Academy of Sciences (RosNIIPM RAS) together with scientists from the Institute of Image Processing Systems, a branch of the Federal Research Center for Crystallography and Photonics of the Russian Academy of Sciences (ISOI RAS). The developed system includes a compact imaging hyperspectrometer with sensors, an on-board computer with special software, and a controller for switching nozzles on the sprinkler.
"Hyperspectral sensors determine the moisture content of soil or the content of certain chemicals in the soil and give signals to the on-board computer, which controls the nozzles through the controllers. This is the first such land reclamation complex in the world, there are no analogues," said one of the developers, a leading researcher at the ISOI RAS, professor Department of Technical Cybernetics, Samara University Roman Skidanov.
According to him, the cost of a management system set will be about 20 thousand rubles per one irrigation and drainage complex. According to RosNIIIPM, the use of such targeted watering and fertilizing can increase productivity by an average of 25-30%, depending on the crop. “I think that such an addressable irrigation and fertilizer application system will be in demand both in our country and abroad,” Skidanov noted.
For reference
By the end of the 90s of the last century, the production of domestic sprinkling equipment in Russia had almost completely stopped and farmers began to purchase imported equipment, however, foreign irrigation technologies often did not correspond to the climatic conditions of the irrigated zones of Russia. With all the positive technical characteristics of imported sprinklers, Russian experts note their drawback - the unevenness of soil moisture after irrigation and its great "variegation" in different parts of the field.
During subsequent irrigation, the difference in soil moisture increases and this affects the conditions of plant growth and development: a decrease in the yield level in the field can reach 25-30% of the average. Therefore, farmers need irrigation technology that allows them to distribute moisture in real time according to a moisture map, and the possibility of targeted delivery of mineral fertilizers would also be very useful.
Share
Facebook Twitter VK Google+ OK