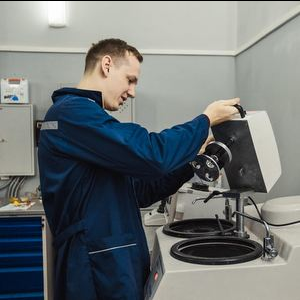 Scientists from Russia, France and Japan will develop a new type of high-performance materials for aerospace engineering

18.06.2020 2020-06-18 2020-06-16
Scientists from Russia, France and Japan will conduct on the basis of Samara University theoretical and experimental studies on the creation of a technology for the production of new highly efficient bimetallic materials for aerospace engineering, which can withstand significant mechanical stress and extreme temperature extremes with a difference of several hundred degrees.
Bimetallic, that is, consisting of two metals, materials have long been used in aviation and space technology, since conventional alloys often do not provide the necessary range of properties. Bimetals allow combining the advantages of different materials, increasing reliability, wear resistance and durability. The use of bimetallic materials, for example, steel and aluminum, allows to achieve the necessary strength characteristics, while reducing the weight of parts and structures, respectively increasing the carrying capacity and fuel efficiency of the aircraft or launch vehicle.
However, according to Samara scientists, when creating bimetallic materials using existing technologies, the bonding strength of heterogeneous layers is in most cases insufficient. Moreover, different metals have different thermophysical properties, and at large differences in external temperatures (in space, for example, from -200°C to +200°C and above), there is a danger of interlayer destruction of the multilayer material. Within the framework of the grant, scientists of the three countries plan to develop the scientific foundations of the new technology and experimentally obtain layered functional high-gradient material (FGHM), which will have increased resistance to interlayer destruction.
“It is very important that the materials used in aerospace engineering are thermally stable, so that they do not expand at high temperatures. This can be achieved by taking different materials with different coefficients of linear expansion and alternating them in a multilayer structure: when one layer expands, the other contracts and in the whole volume - no changes take place. Usually bimetallic materials are produced by rolling - due to high pressure, metal surfaces are actually welded. We propose a new method - using additive technologies," said the metal processing department head at Samara University, RAS academician Fedor Grechnikov.
Scientists propose to apply layers of the metal-powder composition on sheet metal substrates using additive technologies, creating a special micro- and macro-relief on the surfaces, which will increase the contact area of ​​the layers to be joined by an order of magnitude and even form mechanical permanent joints in the form of micro locks. The resulting composite “cake” is then planned to be further pressurized, for example rolled, in order to obtain a high-strength connection of metal layers. "This task requires considerable theoretical and experimental study, therefore, mathematical models and digital doubles of the FHMM will be initially developed, with the help of which the properties of the new material will be calculated and predicted," said Alexander Khaimovich, head of the engine production technology department.
“This is a large joint project. And even inside our university it can be called a joint one, since it will involve two departments at once - metal processing and engine manufacturing technologies. In addition to the large experimental part planned under this grant, theoretical studies will be carried out. The results are supposed to provide not only technology, but also the fundamental foundations for creating a new type of material,” said Yaroslav Yerisov, associate professor of the metal processing department.
For reference
The work will be carried out as part of the project "Development of a method for creating and optimizing the properties of high-gradient bimetallic materials for aerospace purposes". With this project, Samara University became the winner of an open public competition for grants from the Russian Science Foundation (RSF) in the priority area of ​​activity "Conducting fundamental research and exploratory research on behalf of the President of the Russian Federation." The grant is designed for three years with a possible extension of funding, the annual amount of funds allocated under the grant is 8 million rubles.
The project provides for the creation of an international scientific team, which will include employees of Samara University, RAS Institute of Mechanics Problems named after A. Ishlinsky (Moscow), Tokyo Metropolitan University (Japan) and the University of South Brittany (France). The head of the group of scientists is Doctor of Physical and Mathematical Sciences Sergey Alexandrov, a leading researcher at the Laboratory of Mechanics of Technological Processes at the Institute of Mechanics of the Russian Academy of Sciences (IPMech RAS). Among the leading scientists of the project are Ken-ichi Manabe, professor at the Department of Mechanical Systems Engineering, Tokyo Metropolitan University (TMU) and professor Pierre Yves Manach, director of the Dupuis de Lom Research Institute (IRDL), University of South Brittany.
.