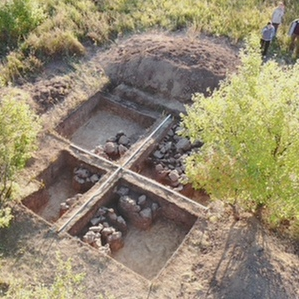 28.10.2020 2020-10-28 2020-10-28
Scientists of the Samara University have launched a series of experiments on using unmanned air drones to search for old burial places. Experiments are held in the framework of archeological excavations on the territory of the burial mound site near Malaya Ryazan settlement in the Stavropol Territory of the Samara Region. Excavations have been organized as part of a joint international multidisciplinary project Early Magyars on the Volga River. * The goal of the project is examination of archeological sites related to the ancient history of the Hungarians.
In the course of experiments scientists will examine the intended excavation area using three devices installed on unmanned aircrafts: a lidar, a thermal imager and a hyperspectrometer. The aerial laser scanning technology (LiDAR – Light Identification Detection and Ranging) that models the landscape of the examined territory to the centimeter have been used more and more often over the last years by leading archeologists of the world to allow making discoveries in places that seem to have been thoroughly examined already. ** Samara archeologists in their turn hope to identify landscape anomalies with the help of a lidar that will point to possible burial places.
However, infrared shooting is of particular interest for scientists. Archeologists test a hypothesis: is it possible to see underground sepulchral stones from a bird’s eye view using a thermal imager? The point is, due to its physical properties the soil heated with sunlight during the day will cool down in the evening, after the sunset much faster than stones it covers, hence, as scientists assume, large stones that cool down slowly under the ground will be visible in the infrared part of the spectrum. ***
Another device added by Samara archeologists to their armory is a hyperspectrometer. With the help of this device one will be able to see spectral anomalies of the examined territory and get data on chemical content of soil. Besides, a hyperspectrometer can shoot in infrared band as well serving as a thermal imager.
For reference
* The international multidisciplinary project Early Magyars on the Volga River started in summer 2019 to be implemented in the framework of an agreement between the Pazmany Peter Catholic University and the Samara University. In the framework of the project in summer 2019, scientists of the Hungarian university and the Samara University carried out excavations in the Stavropol Territory of the Samara Region.
The project is dedicated to the search for location of the Hungarians’ ancestral homeland and the history of ancient Magyars. In the end of the 9th century Magyar tribes made it from South Ural and the Volga River to the Carpathian Depression and chose the Pannonian Basin as a place to settle down. Scientists call this historical period which is critical for the Hungarian people ‘the conquest of the homeland’. However, it’s still a mystery how to define the territory the Magyars migrated from more than a thousand years ago.
According to De administrando imperio by Byzantine Emperor Constantine VII Porphyrogenitus, Magyar tribes started moving west ‘from the locality called Levedia’. Samara archeologists assume that Levedia might mean the territory in the trans-Volga region, in the lower or middle course of the Samara River, where several burial places of 8th – 9th centuries were found. In the course of excavations archeological materials were revealed as well as findings that are important for the historical context.
The collection of findings has become a basis for the virtual archeological museum created in the Samara University. Findings are digitized by specialists of the Department of Supercomputers and General Informatics. The first 3D models of the museum in progress include axes, sabres, signet rings, crockery and other household items. In late October 2019, in the framework of President of Russia Vladimir Putin’s visit to Budapest Dmitry Azarov, Governor of the Samara Region, met Zoltant Nemeth, the President of the Self-Government Office of Hungarian county Gyor-Moson-Sopron, and presented him the exact copy of the ancient Magyar signet ring found by archeologists of the Samara University during excavations in the Bor Territory of the Samara Region. Scientists date this finding of the 9th century. According to them, the signet ring could have belonged to a prominent Magyar warrior or military commander. The copy of the signet ring was made in the Laboratory of additive technologies of the Samara University.
** Due to the aerial laser scanning technology, archeologists found a largescale network of ancient cities, roads and waterworks systems dated 7th – 12th centuries in the forests of Cambodia in 2015. In 2018, scientists found ruins of over 60,000 constructions of the Maya civilization in the jungles in the north of Guatemala with the help of a lidar.
*** There are already cases when a thermal imager has been used successfully in archeology. In 2013, American archeologists used an unmanned aircraft with a thermal imager to scan the old settlement of Native Americans in New Mexico, South-West of the USA. The heat map created for the territory of the settlement allowed finding about 60 ancient indigenous houses hidden under sandstone.
Share
Facebook Twitter VK OK