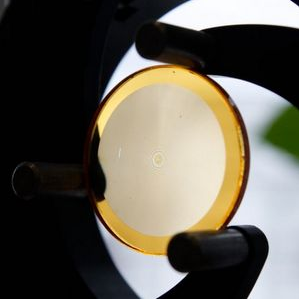 THE: "A radical approach to diffraction optics in space and on Earth"

22.01.2021 2021-01-22 2021-01-25
Scientists at the Samara National Research University have been successfully working in the field of diffraction optics and nanophotonics, developing new optical elements for use in space, agriculture and medicine.
For 40 years, a scientific group at the Samara National Research University – led by Professor Victor Soifer, president of the university and scientific director of the Image Processing Systems Institute – have been researching diffractive optics and computer image processing. Now, the team have created a diffraction lens weighing just a few grams, which can replace the bulky telephoto lenses that are currently used. The alliance of diffractive nanophotonics and trainable neural networks for obtaining high-quality colour images is revolutionary. Samara researchers have tested the new technology on aircraft, and now they are making a diffractive objective lens for CubeSats – a type of nanosatellite. Samara scientists have also developed a compact hyperspectrometer that detects the composition of materials on the observed surface. This is important for solving mineral exploration problems and carrying out ecology monitoring. Optics based on diffractive lenses can also be applied to agriculture. For example, with a control system for the smart sprinkling machine developed by Samara scientists, the agromeliorative complex can independently analyse soil.
Ongoing collaboration with other research groups helps the university stay at the forefront of scientific development. “In cooperation with the Prokhorov General Physics Institute of the Russian Academy of Sciences, we made diamond-based optics for high-power lasers,” Professor Soifer says. “With the Budker Institute of Nuclear Physics, we are working on terahertz optics. Now, we are open for international collaboration to create photonics on a chip.”
Samara has effectively cooperated with research centres in Italy, the US, Finland, Germany and Ireland. “At the first stage, we only had ideas without our own technological capabilities to implement them, so international cooperation played an important role,” Professor Soifer says. “Since the early 2000s, we have had sufficient scientific equipment, for example, electron [beam] lithography and other plasma-chemical etching systems, allowing us to produce diffractional nanostructures independently. Our international cooperation is still developing. Today, Dmitry Nesterenko collaborates with Kobe University in Japan in the field of optical resonant sensors, and Svetlana Khonina collaborates with the University of Miami in the US, studying the propagation of vortex beams through various mediums.”
Professor Soifer’s research group consists of 20 scientists, each working with three or four students. Professor Soifer considers Samara’s approach to scientific research and education ideal; students are encouraged to study a broad range of topics, letting their inquisitive nature ensure there is no stagnation.
The Russian government’s support of the university adds to its success. This support comes in the form of grants from federal scientific foundations and regional support of the relevant agricultural, ecological and urban projects.
Samara plans to continue developing devices based on the integration of optical and information technologies, primarily with artificial intelligence. Its scientists are working on various cutting-edge projects, from vortex beams that can transmit information in free space to the exploration of new wavelength ranges.