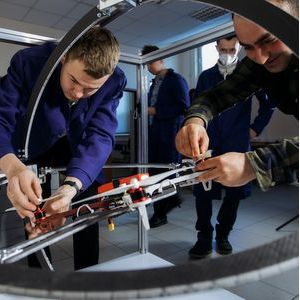 The development will allow students to quickly move from theory to piloting practice, with no fear of breaking the drone under study

15.02.2021 2021-02-15 2021-02-19
Researchers from Samara National Research University have developed the first in Russia training complex for UAV pilots, which combines virtual reality and a real drone. The development will allow students to learn in a safe mode peculiarities of piloting a particular drone, with no fear of damaging or breaking the often very expensive unmanned aerial vehicle.
According to one of the authors of the development, David Ovakimyan, Head of the Unmanned Systems Centre at Samara University, this training complex, created with support of the Government of the Samara region (1), is original because it is not purely software. Usually, such simulators for training future UAV pilots are virtual ones, similar to computer games, in which the physics of flight and many peculiarities of piloting are just close to reality (2).
The Samara development also includes a flight simulator, i.e. a virtual part letting you, looking at the monitor, operate the virtual drone in various locations – for example, in the city, in the countryside, etc., as well as under different weather conditions. Nevertheless, in training flights on this simulator, a real drone is also involved. To make its flight completely safe, eliminating any possibility of the UAV damage, the developers came up with a kind of "baby walkers" for the drone, or "flyers", to be exact: the drone involved in the flight is suspended in the special cube with “the ring in the ring" construction. The drone is located in the center of the rings, and can occupy any position, while remaining in place.
"The originality of our complex is that its design allows the student to simultaneously operate both the virtual drone in computer reality and the real drone that is installed inside the training complex", said David Ovakimyan. "Both drones, virtual and real, are synchronized, and everything that happens to the copter in virtual reality is immediately duplicated on the real drone. Thus, the student sees the real aerial vehicle acting as a result of certain maneuvers, for example, with strong wind, rain or snow, or which critical angles of attack it can "fall down" at. In the course of training, it is very important for aspirant pilots to see the real drone reactions, and not those of its computer-generated image".
According to the Head of the Unmanned Systems Centre, in Russia, for several years there has already been a profession of "external pilot", it is an official name for UAV operators, and the Samara Region is among the leading regions in terms of the number of educational institutions where such specialists are trained. The number of unmanned aerial vehicles used in various fields constantly grows, and, respectively, the need for external drone operators grows too. For two years, in the Institute of Further Education and the Unmanned Systems Centre, Samara University has been conducting classes on training quadcopters external pilots. The Samara developers are planning to make the simulator comply with the Federal State Educational Standard (FGOS).
"The complex will allow students to study the training course for external pilots much faster and easier. They will be able to safely practice on the simulator those piloting skills that are quite difficult to learn when flying out of doors, in the field environment. Now, this specialty educational process proposes the study of theory, and immediately after that, practical classes on launching drones outdoor. There is no interim stage, like laboratory works, which could prepare students for proper handling of equipment", emphasized David Ovakimyan. 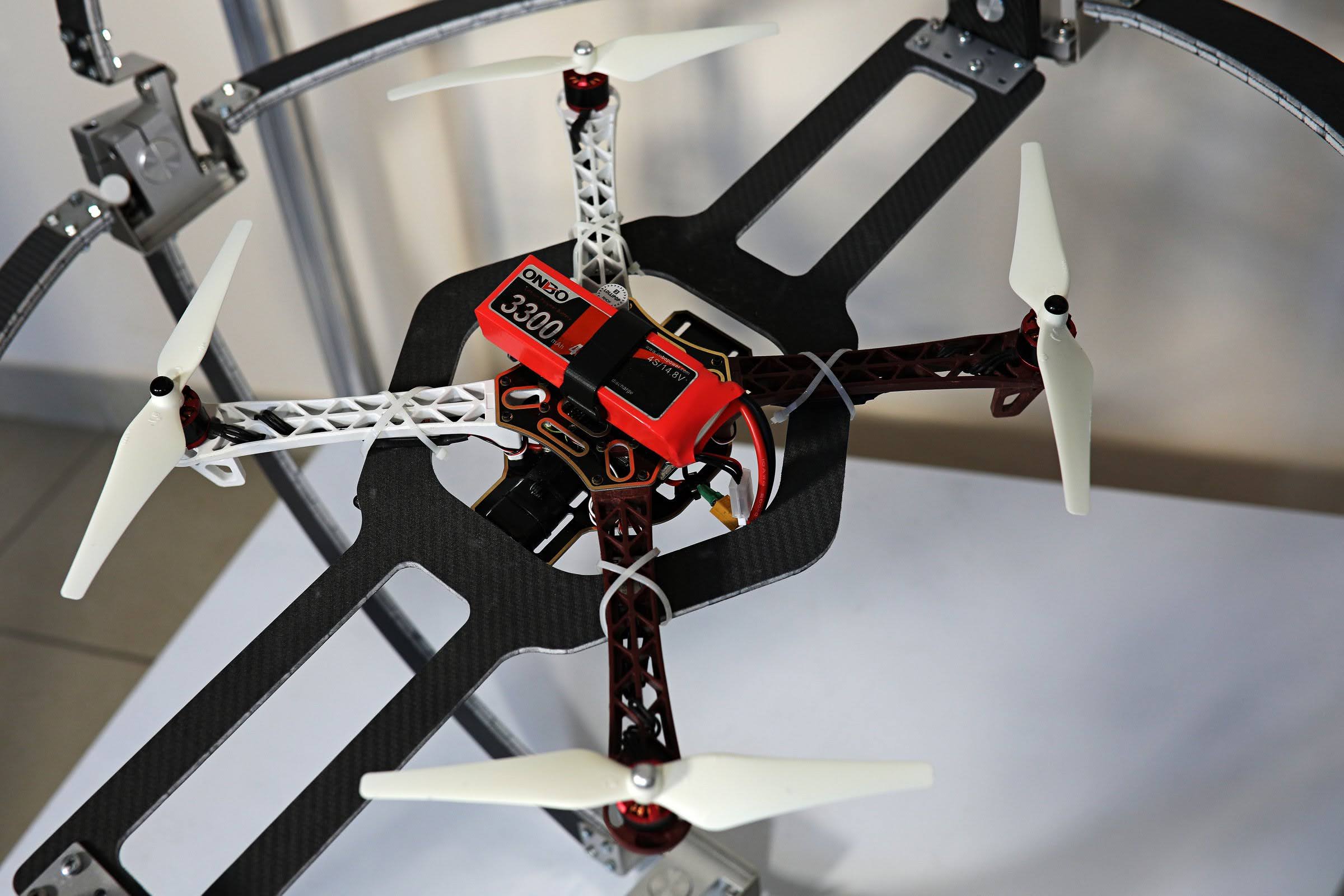 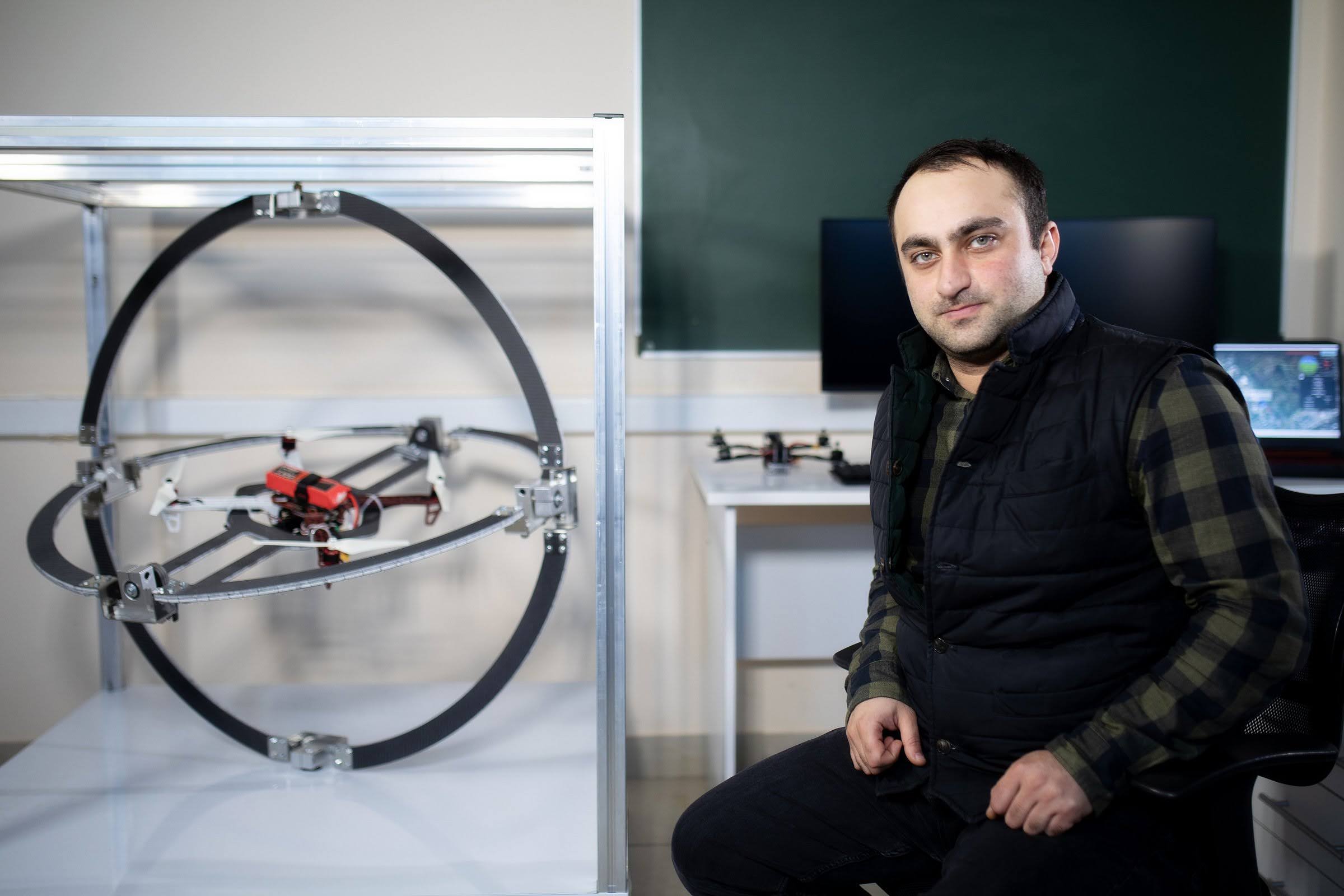 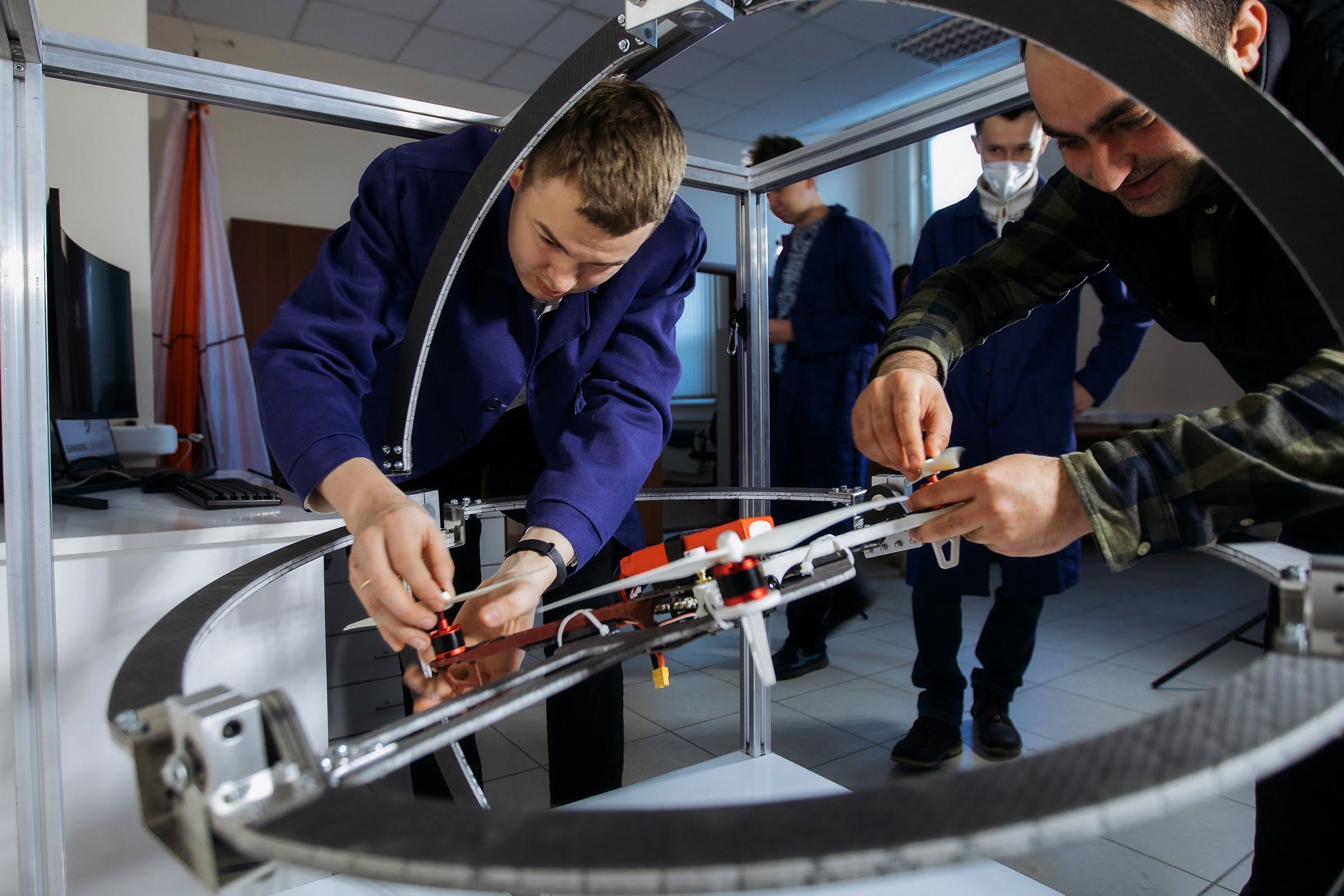 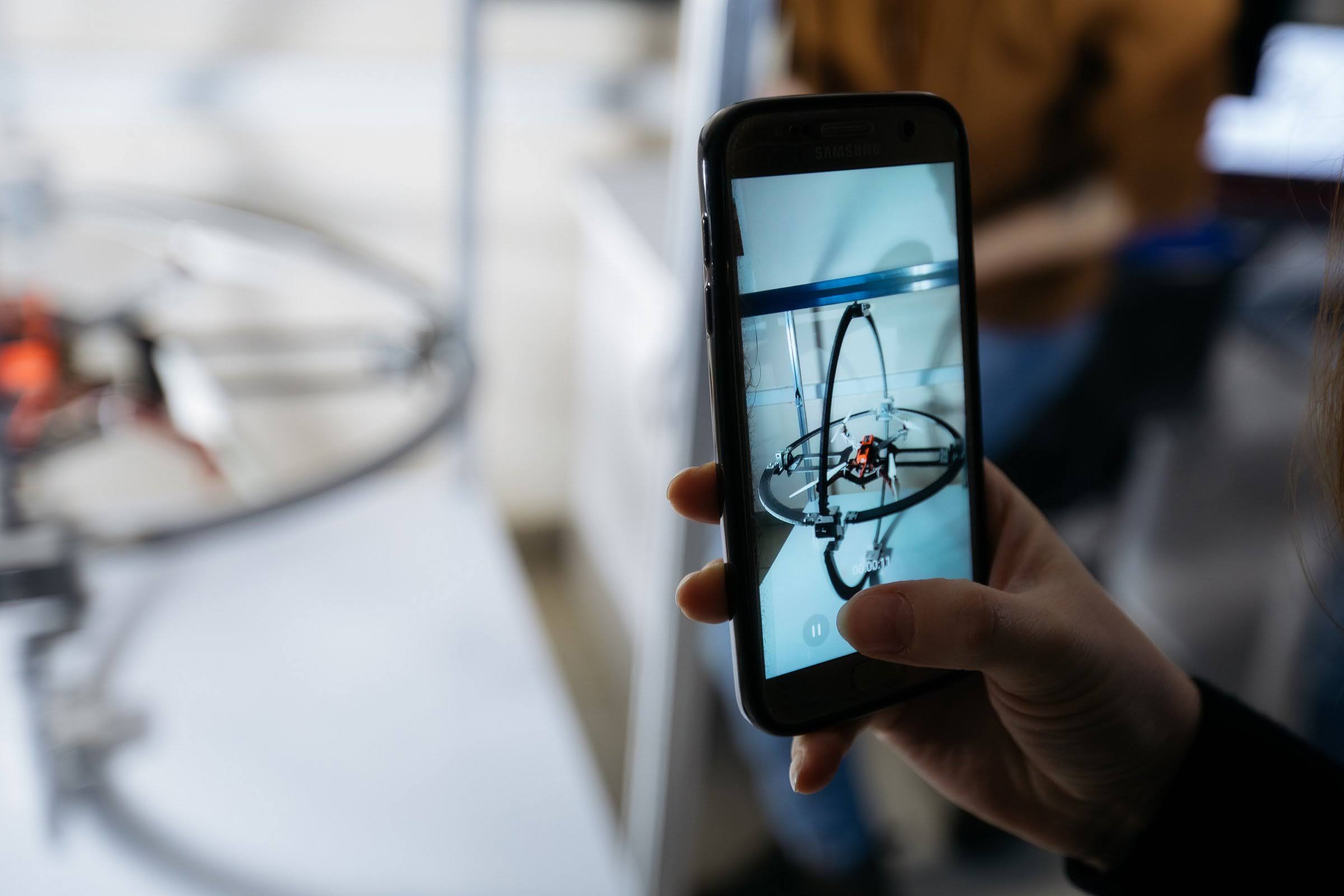 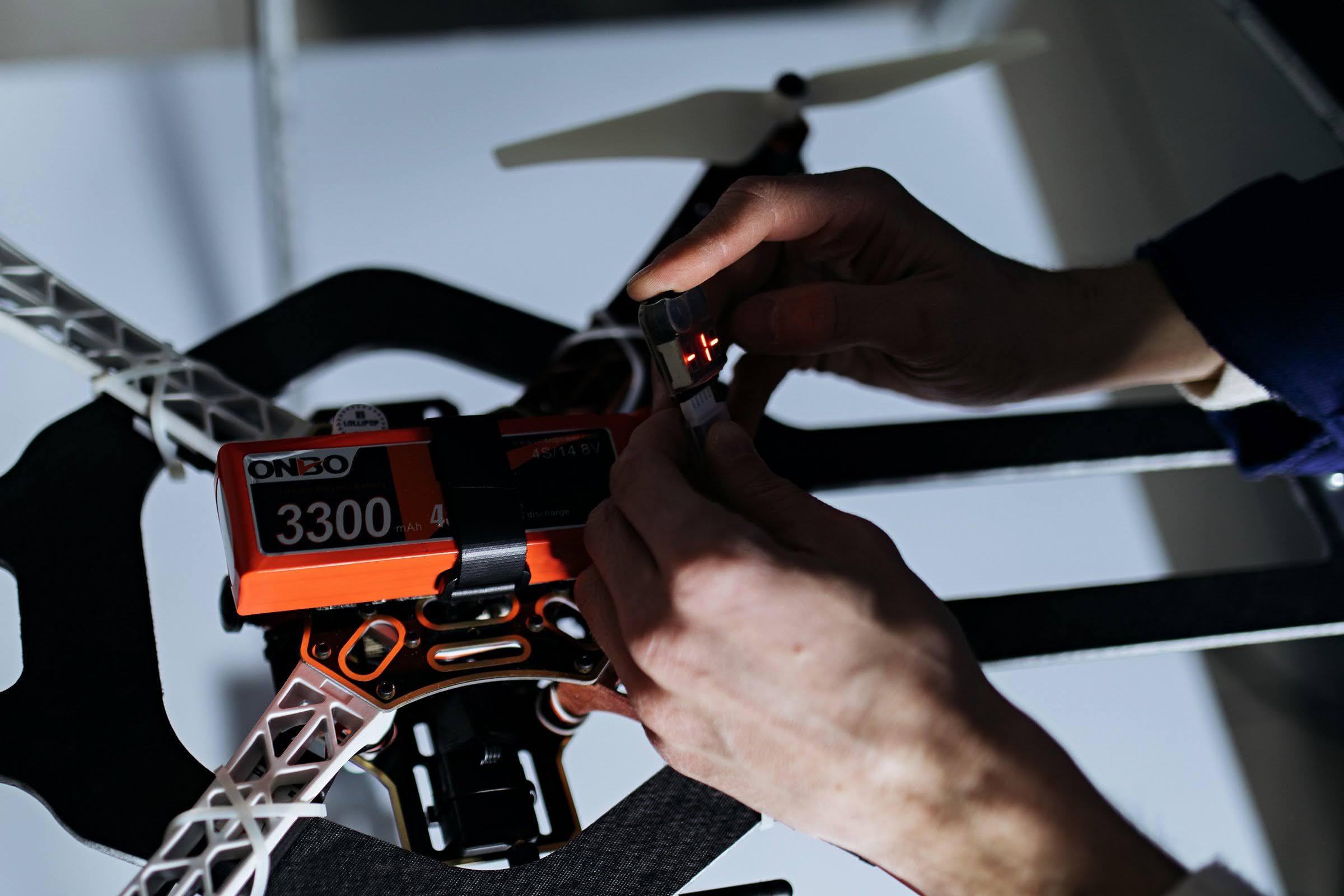 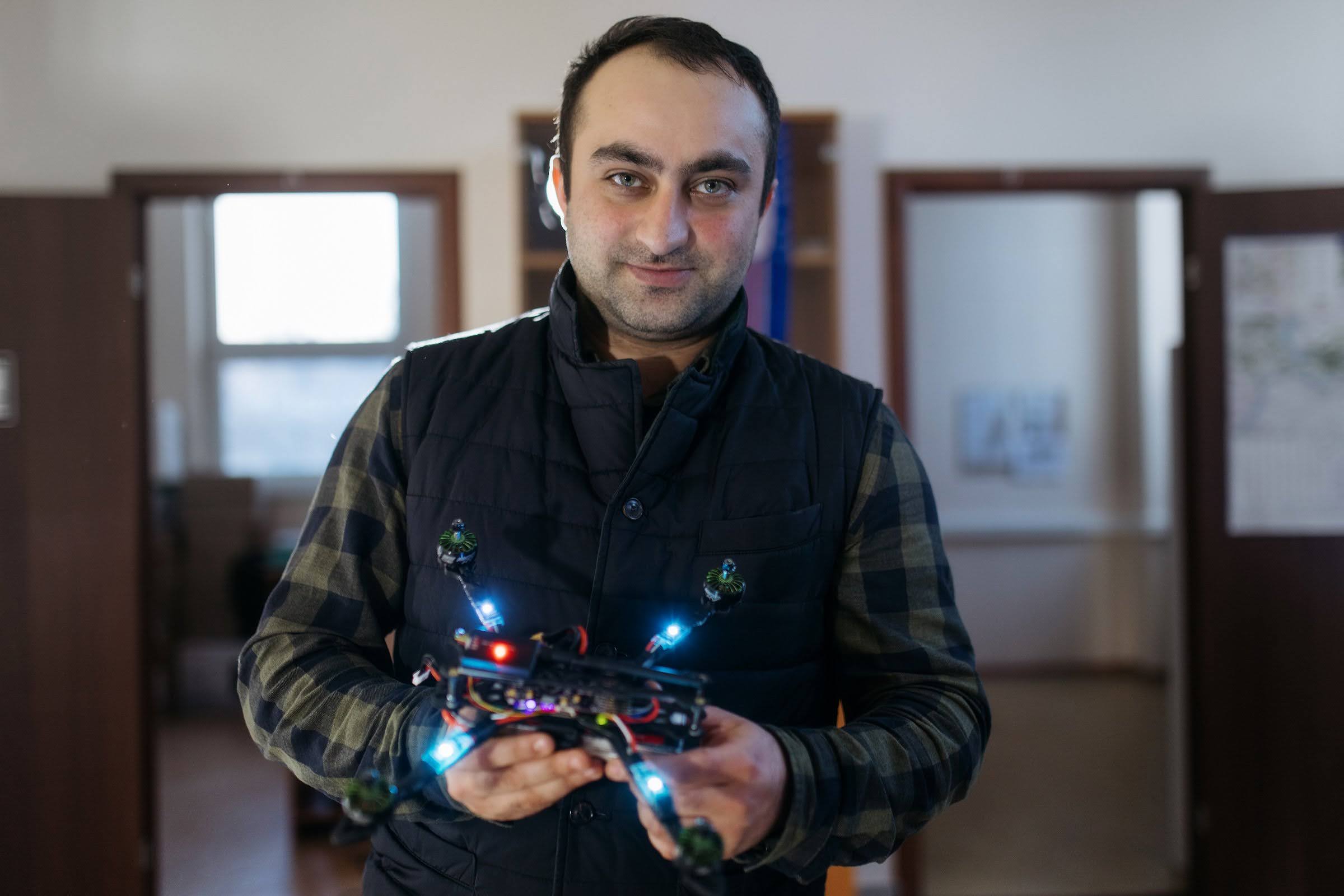 Physically, the training complex is designed so that on “the ring in the ring" construction you can place almost any type of UAV – aircraft drone, quad-, hexo-, octocopter, and other types of drones. The corresponding aircraft specifications are entered in the electronic equipment of the training complex. Within the project, the developers have prepared applications for two patents – one for the design of the cube where the drone is placed, another for the software – the UAV flight simulator.
in the prospect, the training complex is planned to be improved. Even now, this simulator can be used for distance training as the developers have provided for users the ability to connect to it via the Internet, and operate the drone remotely: in this case on the student’s monitor there are two pictures – the virtual reality image and the video of the cube with the real drone. In addition, the training complex can be used for research purposes – as an educational stand. It has the capability of connecting the MATLAB software package and various modeling and programming environments.
"In fact, this is an educational stand. It can be used to simulate the aerial vehicle movement, and it is a good lodgment for research projects, and training future scientists. Using the complex, it will be possible to conduct experiments in the field of ballistics, dynamics and motion control; for such experiments, this is universal, almost ideal equipment, suitable for many researchers", said David Ovakimyan.

1) The project of the training complex has been developed in the framework of the grant of the Samara Region Innovation Fund, with co-financing of Samara University, and the regional Ministry of Education and Science support.

2) According to open sources, in some cases a number of existing computer simulators for aerial vehicles act radically differently from piloting in real conditions, which can result in an emergency situation or even a disaster.