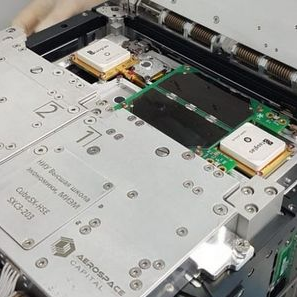 Orbital launch is scheduled for March 20 from the Baikonur Cosmodrome

19.03.2021 2021-03-19 1970-01-01
Ultralight optical systems for Earth remote sensing developed by researchers of Samara University* will be tested in space onboard Russian nanosatellites Cube SX-HSE and Cube SX Sirius HSE**. According to Roscosmos, the launch will take place on March 20 from the Baikonur Cosmodrome as part of the payload cluster of Soyuz-2.1а carrier rocket. Together with the Russian spacecraft, satellites from the UK, Germany, Italy, Canada, Japan, Saudi Arabia, the UAE, the Republic of Korea, Israel, Thailand, Brazil, the Netherlands, Argentina, Hungary, Spain, Slovakia and Tunisia will be orbited.
"So far the ground-level tests have been successful, but they mostly checked tolerance to acceleration and temperature. Now we are about to see how the optics will behave on the orbit, and that, first of all, depends on satellite stabilization systems", - says Roman Skidanov, leading researcher of the Image Processing Systems Institute of the RAS, professor of the Department of Engineering Cybernetics at Samara University.
Development of an ultralight optical system for Earth remote sensing has been carried out in scope of the grant provided to the scientists by the Foundation for support of innovations under the auspices of the government and Ministry for Economic Development and Investment of Samara Oblast. The system functions by means of a University-developed flat diffractive lens capable of replacing the conventional system of lenses and mirrors used in modern telephotography, and having a very low weight.
In the process of the lens manufacturing, surface of quartz glass is coated with "resist" — photosensitive substance 10 micrometers thick (for comparison, the thickness of a human hair is 40-90 micrometers). A 256-level microrelief is created on the resist using a laser beam. Thereby an image of an object is "zoomed in", and distortions are compensated by computer processing of the resulting images based on deep learning neural networks. There is no previous experience of using diffraction lens based optics in space.
Flight trials in space are expected to demonstrate the capabilities of the optical systems and reveal possible improvement areas for the technology. According to the developers, on top of its low weight and compact size, the diffraction lens optics is also cost-effective: so, for instance, a standard foreign-made lens for Gecko Imager cubesat costs about 23 thousand Euro whereas the Samara optical system is times cheaper.
The images obtained by Cube SX-HSE and Cube SX Sirius HSE nanosatellites will be transferred from the orbit for computer processing to Samara University.
"We have already prepared the neural networks trained to analyze data from diffraction lens cameras. Clearly, images from space will significantly differ from those we used for the training on Earth. Experience will show how the artificial intelligence will behave", - comments Nikolay Ivliev, senior researcher of R&D laboratory for automated research systems, Associate professor of the Department of Engineering Cybernetics at Samara University.
According to Samara scientists, miniature optical systems of nanosatellites have lower resolution capability compared to dedicated optics installed on large Earth remote sensing systems (from 500 kg to several tons). So, the expected resolution of the first optical systems will only reach about 100 meters per pixel. However, low-budget nanosatellites with compact optics can become the basis for large-scale orbital constellations made of hundreds of such spacecraft, to enable Earth monitoring in near real-time mode to quickly obtain images of the necessary part of the Earth surface, without waiting for the large Earth remote sensing satellite to reach the desired location. The obtained information will be crucial for immediate monitoring, e.g. in situations with spreading wildfires and high waters, for observation of agricultural crops and in other purposes.
For reference
* Samara University is one of the global leaders in research of diffraction optical elements and image processing. The diffraction lens developed in the university is one of the outcomes of the 40-year effort of the diffraction optics and nanophotonics school headed by RAS academician, Samara University President Viktor Soyfer.
The first article by scientists from Samara University proving the possibility of using diffractive optics in imaging systems was published in May 2015 following the results of the world's largest conference on image processing - IEEE Computer Vision and Pattern Recognition. In November 2015, a collaborative work on this topic by the University of Toronto and the King Abdullah University in Saudi Arabia was published with reference to the work of Samara University. In previous worldwide experience, diffractive optics had never been used to produce high-resolution color images. Use of flat diffraction optics in Earth remote sensing systems is studied in the paper published in IEEE Journal of Selected Topics in Applied Earth Observations and Remote Sensing.
**From earlier publication at the website of the National research university of the Higher School of Economics (HSE), Cube SX-HSE and Cube SX Sirius HSE nanosatellites have been developed by the specialists of the training and research laboratory for functional safety of spacecraft and systems of HSE MIEM NRU in collaboration with SPUTNIKS company (Cube SX-HSE) and secondary school students participating in the Big Challenges program by Sirius Education Centre in 2019 (Cube SX Sirius HSE). Both satellites have CubeSat 3U form factor and are intended for solving a variety of scientific and educational problems.
Photo: roscosmos.ru
Share
Facebook Twitter VK OK