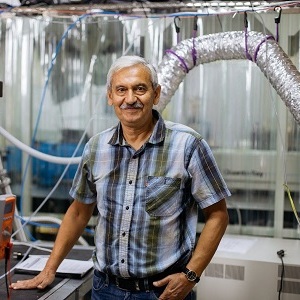 28.10.2021 2021-10-28 2021-11-25
At Samara National Research University, there has been created the world’s largest experimental Unit to study reaction dynamics and kinetics of combustion processes. It will be instrumental in designing effective and environmentally friendly engines and unravelling the mysteries of how bio-chemical molecules came into being, i.e. those "bricks" which go into the making of all the known forms of life on Earth.
The Unit has been designed and built at the international science laboratory "Combustion Physics and Chemistry" within the framework of the Mega-Grant of the Government of the Russian Federation "Elaboration of the Physically Justified Models of Combustion". The lab is headed by Alexander Mebel, Professor of the International University of Florida (Miami, U.S.A.).
"At Samara University work has been completed aimed at creating a test unit whose purpose is to investigate combustion processes. Now equipment calibration is underway, preparations for the first tests to be run have commenced.
At the present time, this is the largest Unit of such type in the world. Apart from this Unit in Samara, there are three more units elsewhere but their volume is smaller: there are two in the U.S., at the University of Hawai’i and at Ernest Orlando Lawrence Berkeley National Laboratory, and there is one in China, at Hefei University.
Our Unit features a number of unique high points and using it, one can research and simulate not only the processes which take place in combustion chambers of gas turbine engines but also chemical reactions characteristic of circumstellar space and molecular clouds(*)",  - Alexander Mebel told us.
Development of the Unit has been going on since 2017. Special turbomolecular pumps made in Japan which achieve super-high vacuum and also a U.S. made mass-spectrometer were purchased for the project. To accommodate the Unit’s components and the auxiliary equipment, a whole hall was allocated in the laboratory, however the main platform for staging the experiments is the vacuum chamber, which is approximately two meters long and one meter and a half high. The weight of the chamber is one and a half tons and it took a construction crane to lift the chamber and bring it in the University laboratory on the third floor some time ago. Since the Unit operates at super high levels of vacuum, virtually in deep space, therefore, according to the lab staff, the requirements as stringent as those applicable to deep water or outer space probes were complied with to make sure that all the joints were absolutely leak proof.
In order to reach super high vacuum, the pumps need to run for about three days, therefore it is designed for autonomous operation round-the-clock. For example, the pumps use "perpetual" bearings on magnetic suspension which sustain no wear and need no lubrication. In case something goes awry, the smart equipment itself will alert the scholars of the problem in the messenger. 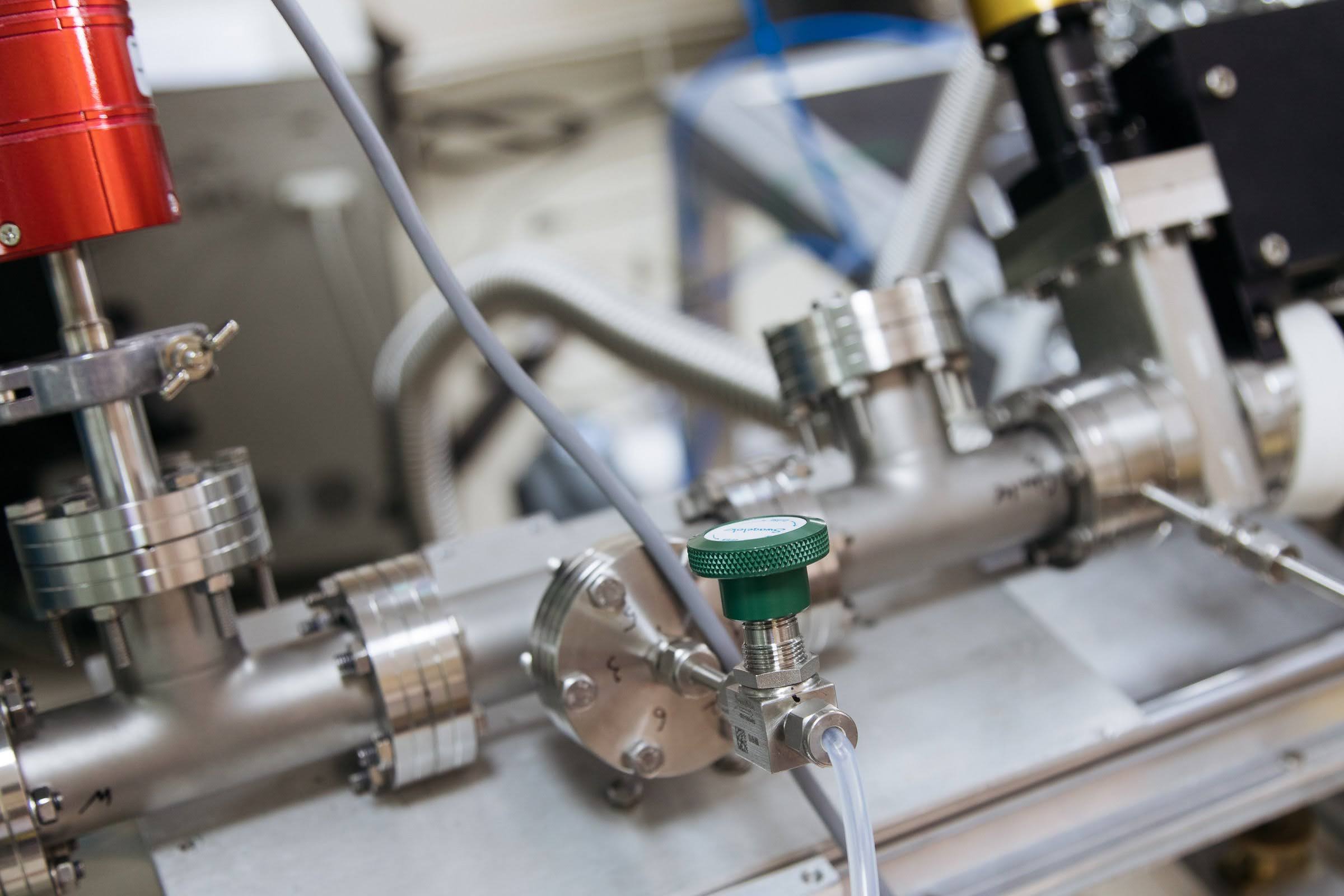 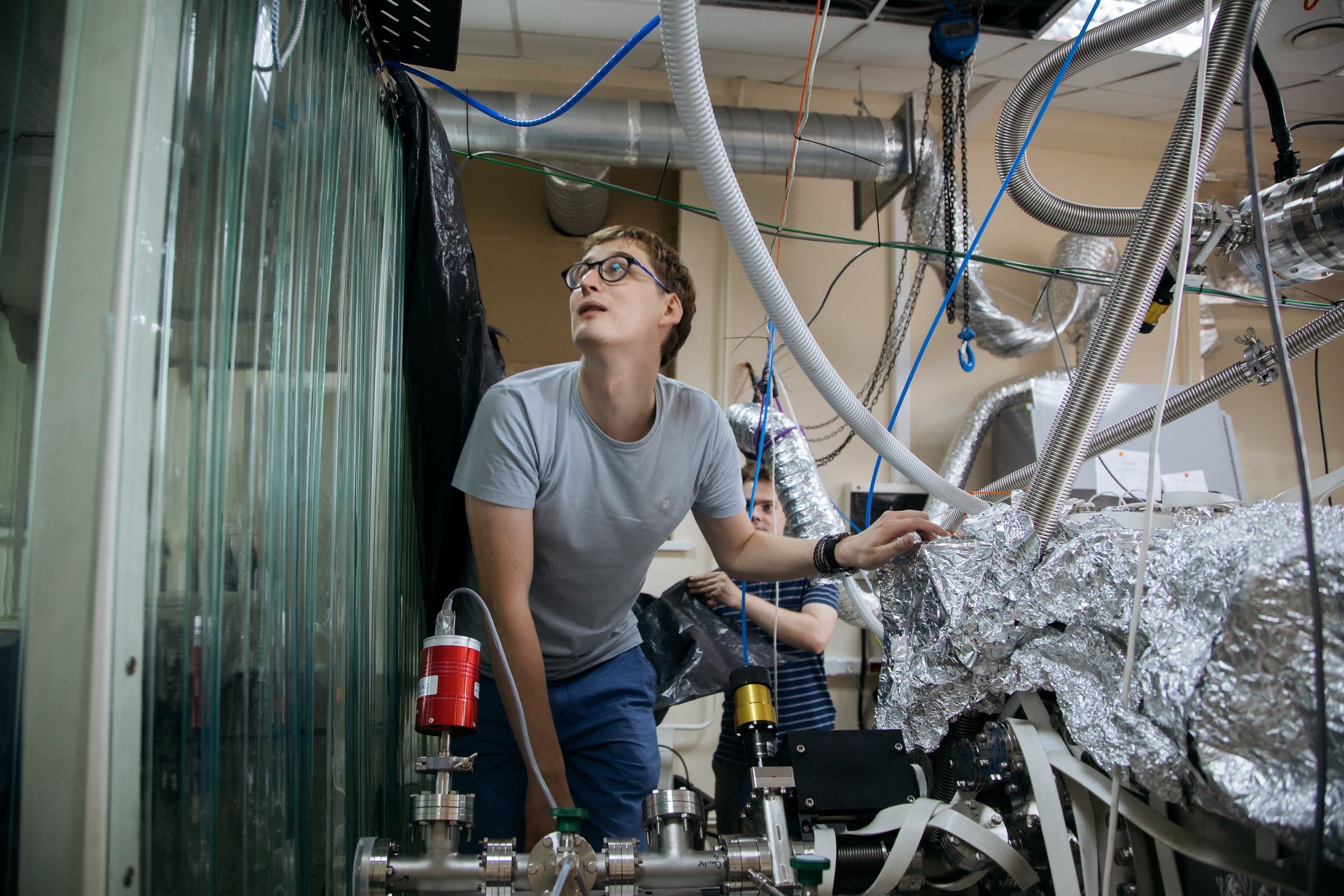 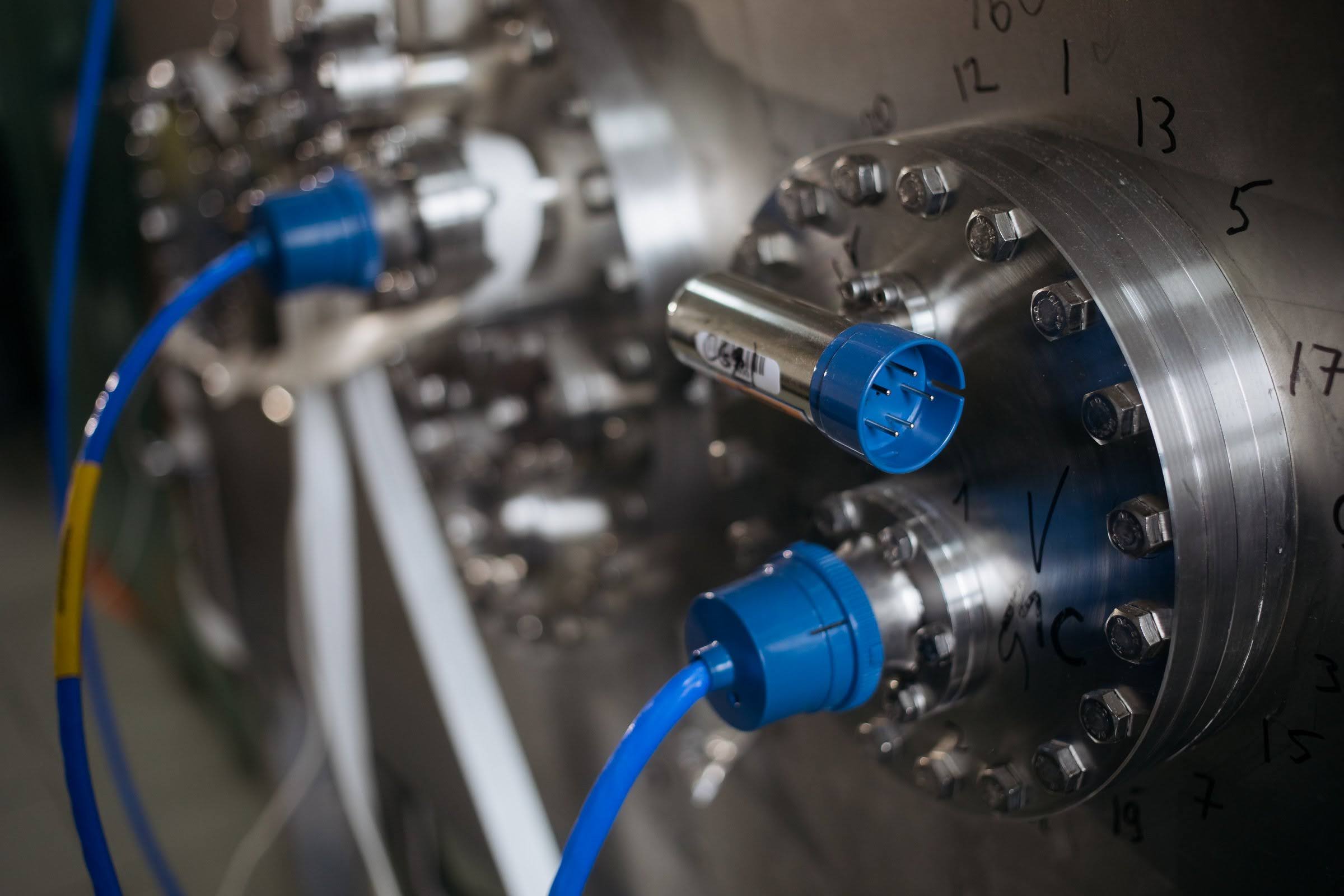 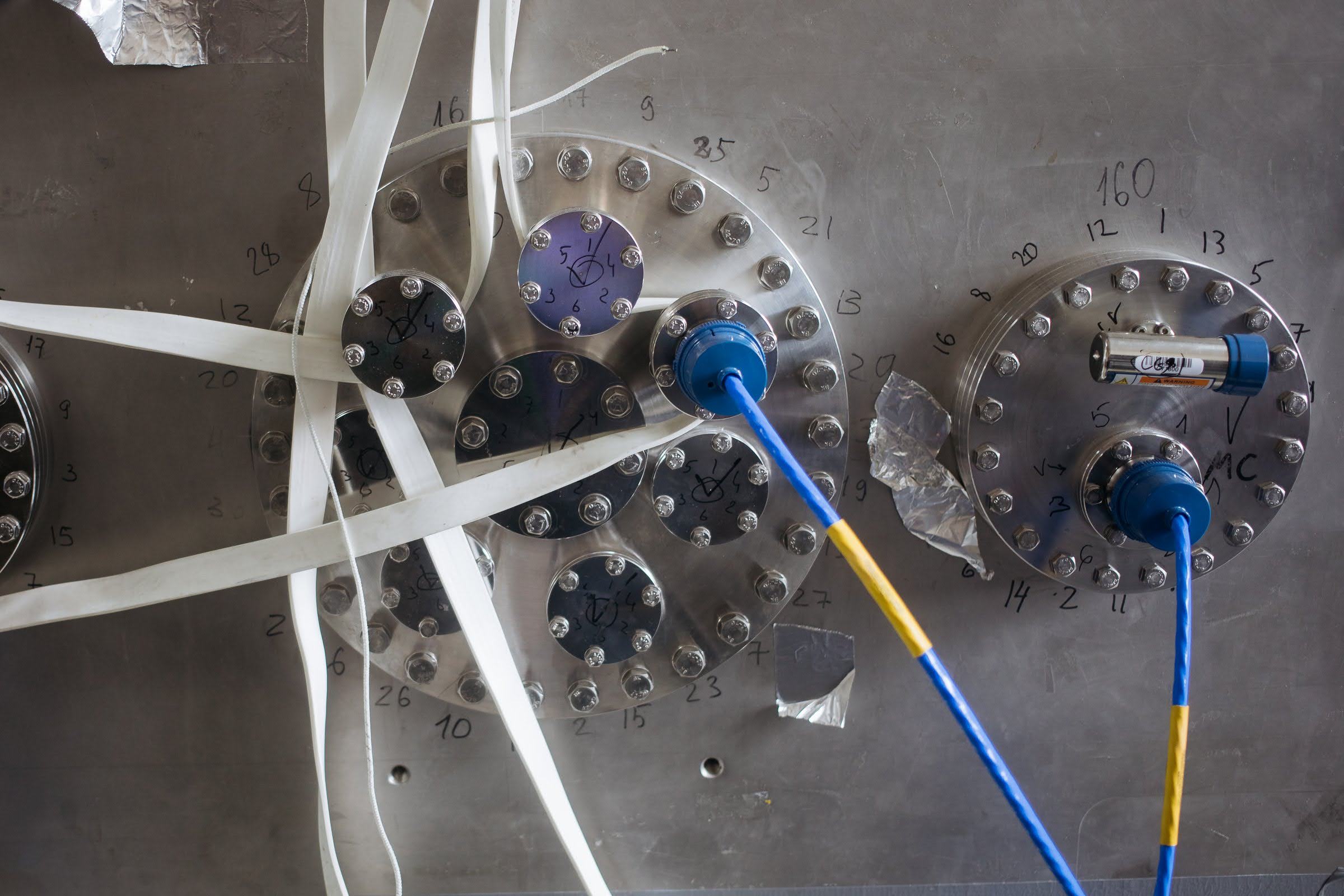 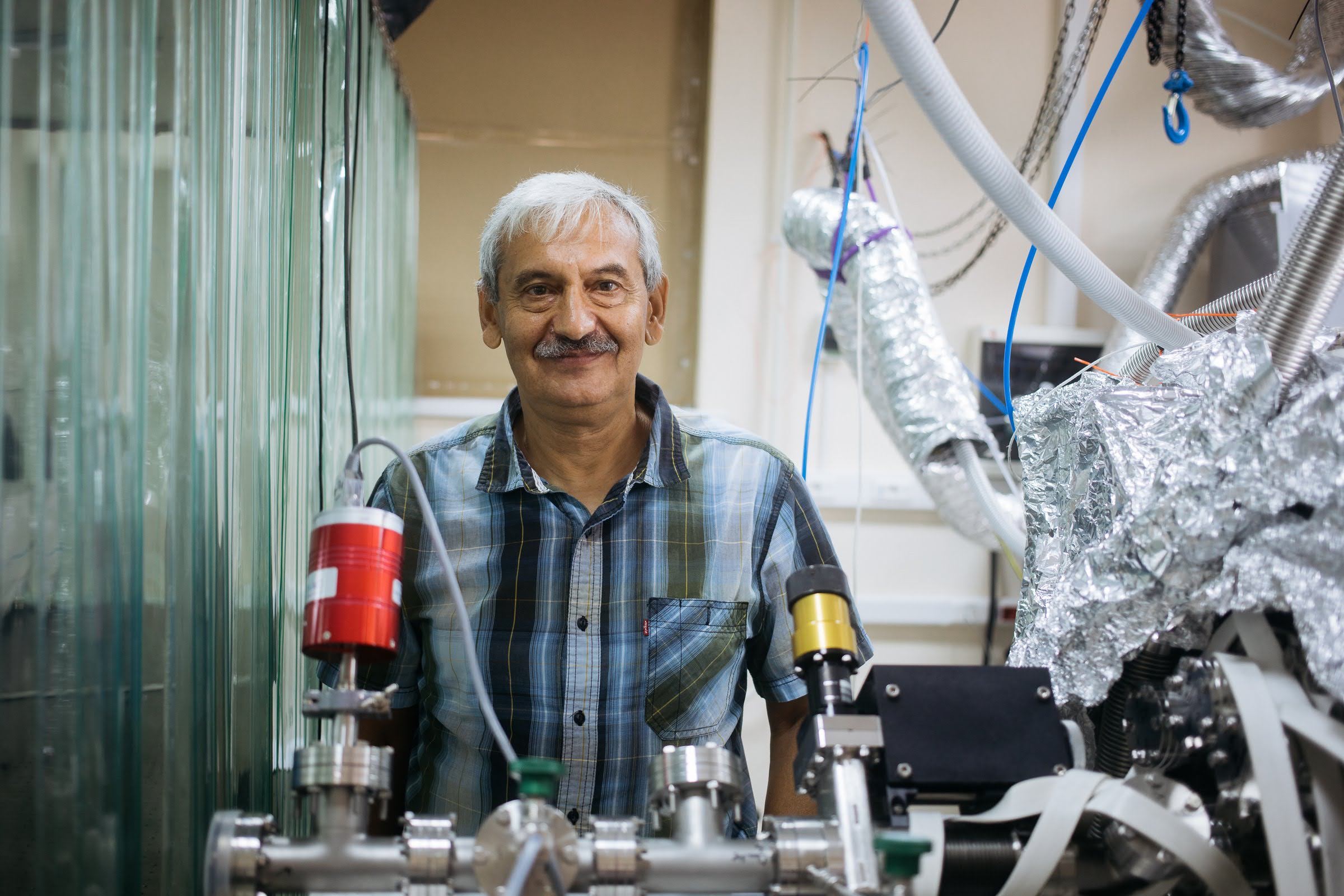 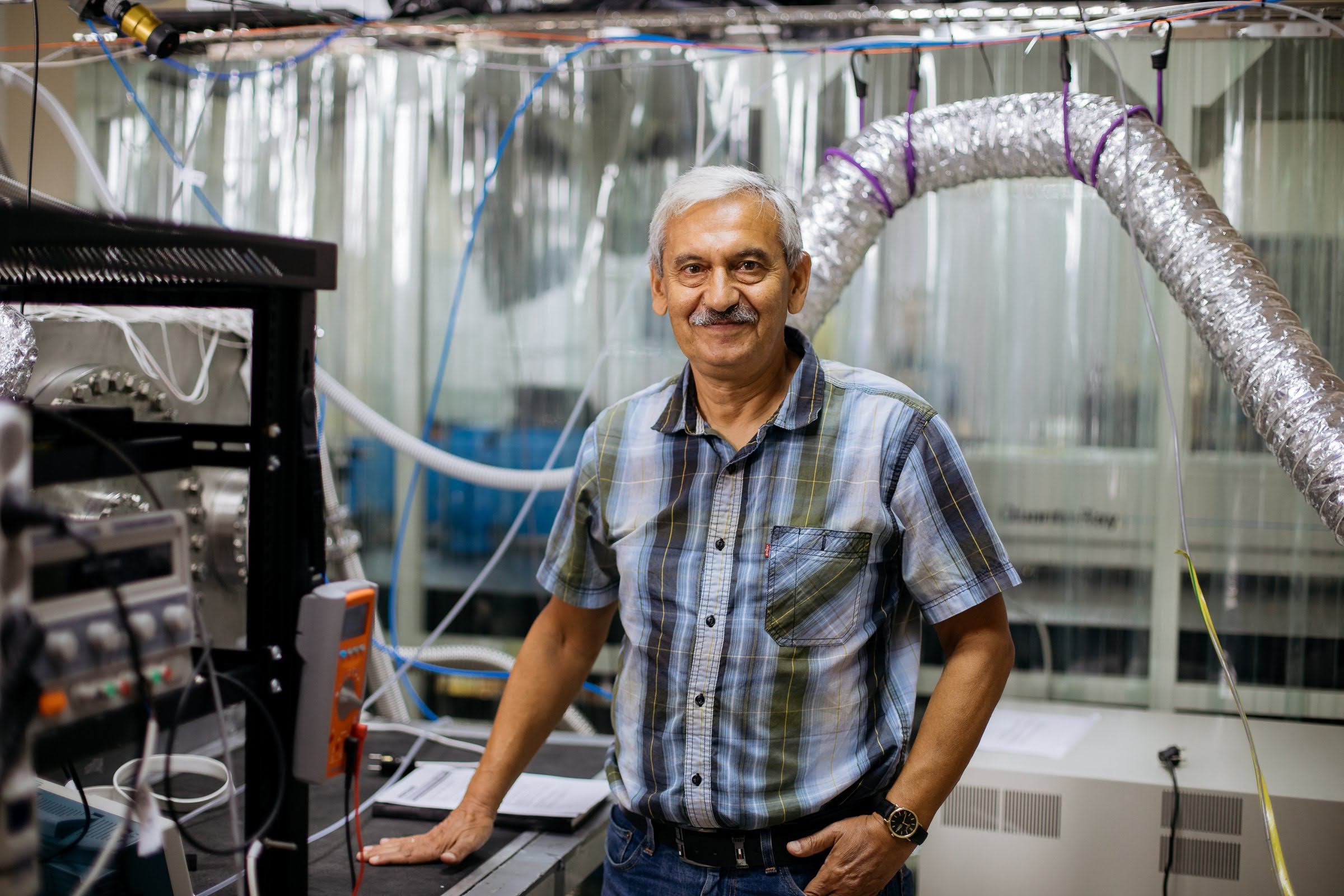 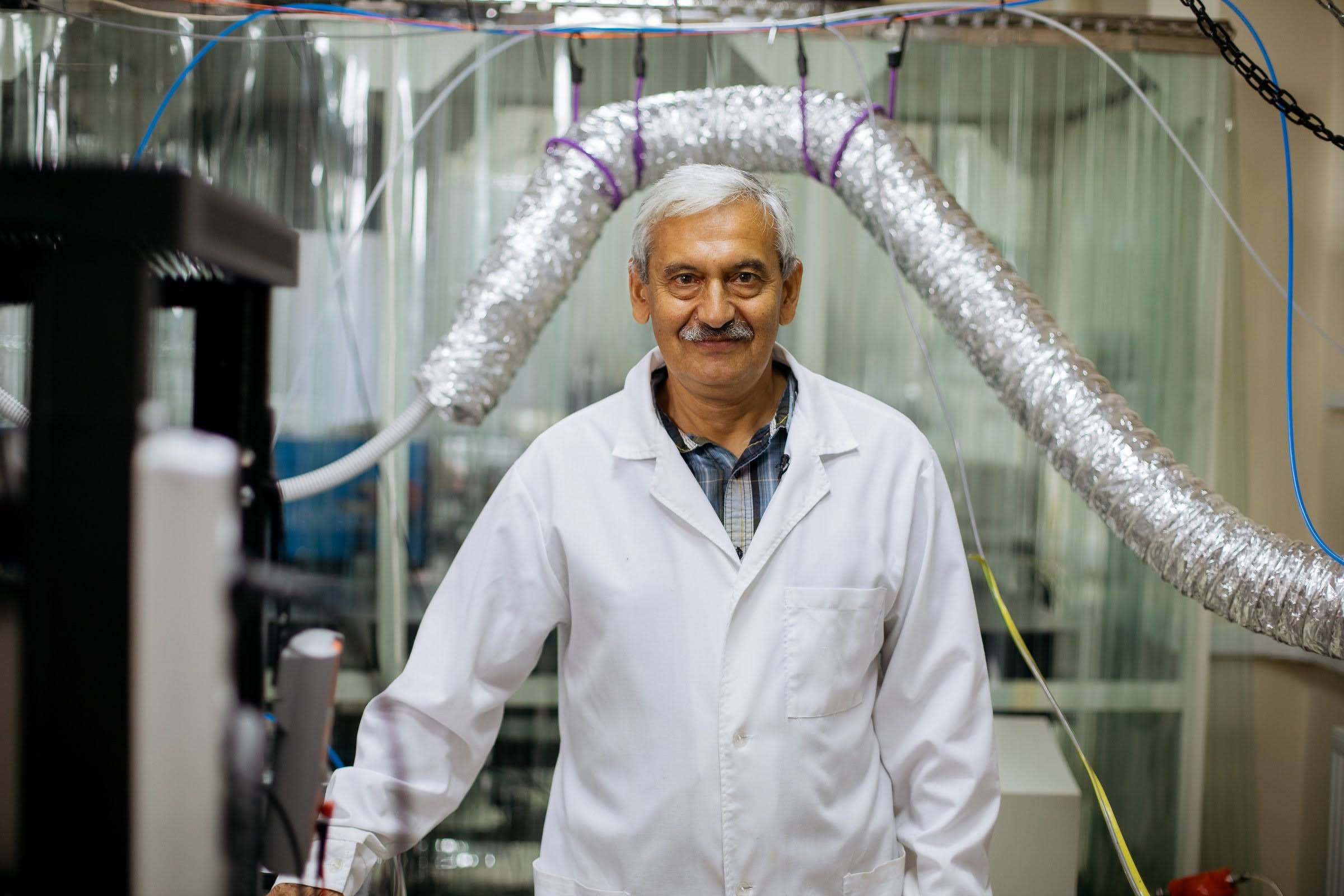 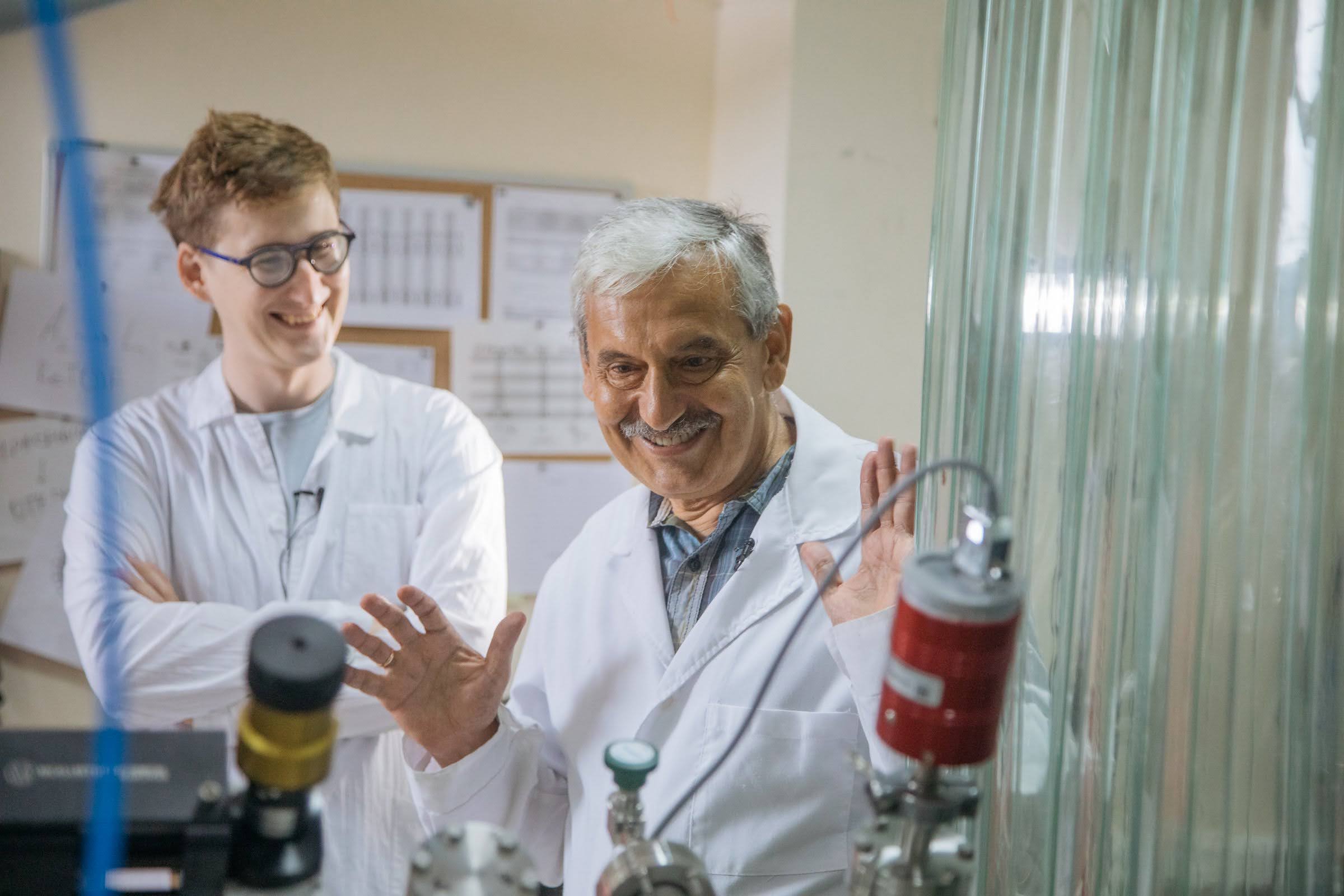 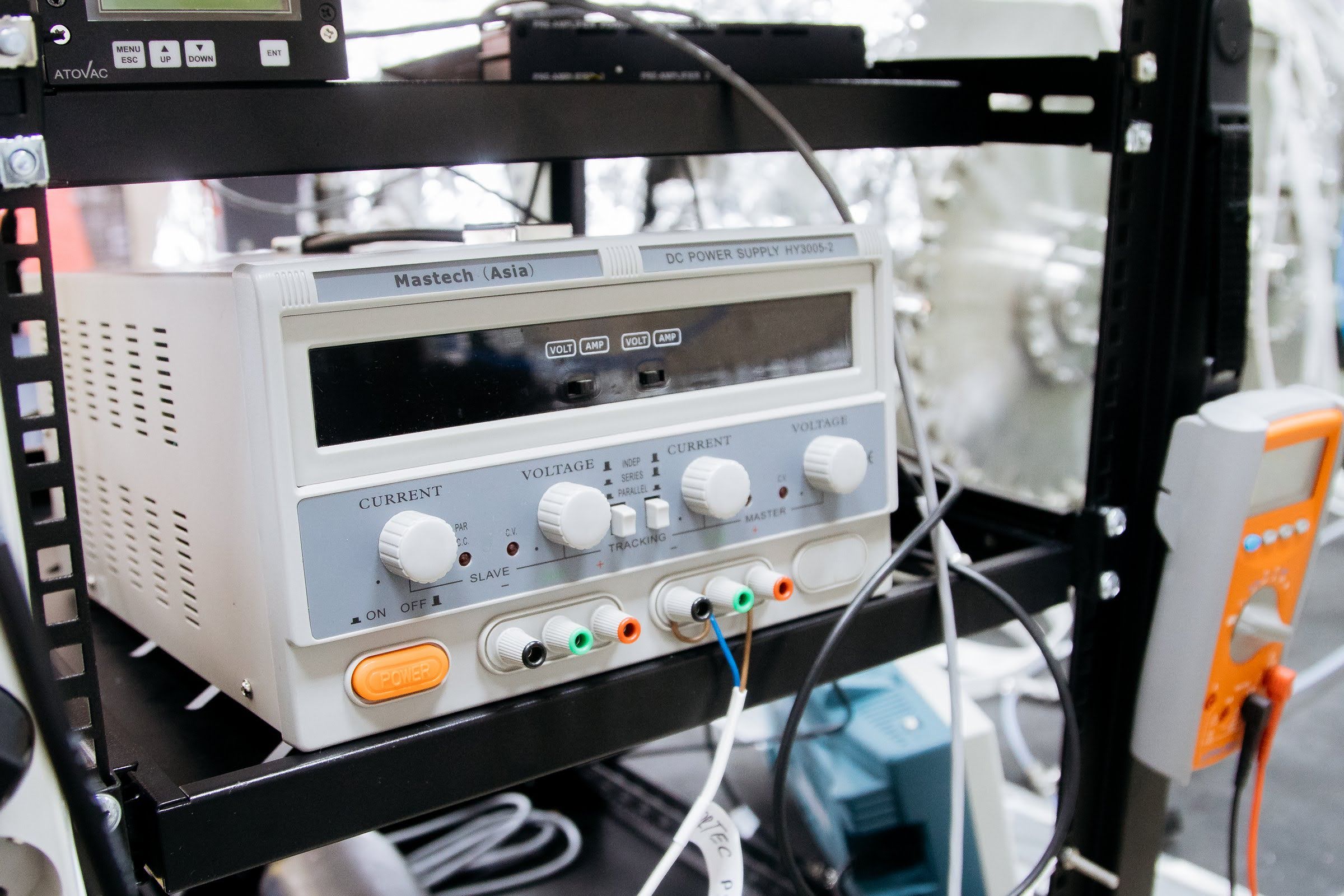 The "heart" of the Unit is the high temperature chemical micro reactor in the form of a thin tube made from silicon carbide(**) developed by the scholars of Samara University and the Samara Branch of P.N. Lebedev Institute of Physics, Russian Academy of Sciences (FIAN). Silicon carbide is extremely scarce in natural environment on Earth however it is plentiful in outer space in the form of "stardust" particles. The length of the tube is 20 cm, its inside diameter is 1 mm.
In the course of the tests, supplied to this tube is a mixture of gases containing inert gas, namely – helium or argon – and reagents necessary for the reaction under study. In the heated-up micro reactor, there takes place a reaction whose products, as a molecular beam, continue on their way, find themselves in super high vacuum and become ionized by vacuum ultra-violet radiation, following which the mass-spectrometer, "having captured" the ions generated, makes a very accurate determination of the mass, structure and other details of the molecules resulting from the chemical reaction.
"The world’s very first unit of such type was built around 15 years ago when word got around that it was possible to use photo-ionization for determination of products of elementary chemical reactions. With every new unit built, new experience is accumulated, its performance characteristics are refined that is why the Unit in Samara was designed drawing back on the experience of the previous ones.
And the fact that this is the world’s largest unit of such type in terms of volume is very important – size in this case definitely does matter – since it is due to great volume that selectivity and sensitivity of reaction product determination is significantly improved.
Therefore this will enable more accurate models of combustion processes to be produced which would make it possible to project, specifically speaking, how a concrete engine will work under specific conditions and what needs to be done to increase efficiency of fuel combustion and to reduce hazardous emissions", stressed the Head of the Laboratory.
According to him, uniqueness of the Samara Unit lies also in the fact that it allows speeds of chemical reactions to be measured and kinetic models of combustion to be created.
"The purpose of our Unit is not only to determine the spectrum of the products generated but also to measure speeds of chemical reactions which are necessary for kinetic models of combustion. That means, it will give us an understanding of when exactly, how quickly and what substances are produced and consumed. And this is indeed what makes this Unit unique because such Unit has not been used to measure chemical reactions by anyone else in the world before", - said Alexander Mebel.
Going forward, the Unit can be easily upgraded which would widen the range of experiments that could be staged.
"Our Unit is designed such that using this facility one can conduct tests with several molecular beams. When we were designing it, as early as at the drawings phase, we provided for such an upgrade to be made. Currently, the vacuum chamber provides for one molecular beam, however the design allows a second beam source to be installed. If you conduct experiments involving crossed beams when flying molecules from different beams collide with each other, you can explore the chemical reactions going on not only in the circumstellar space where you have high temperatures, but also in molecular clouds which are far away from the stars and where, respectively, the temperature is very low," - Alexander Mebel told us.
In the scientist’s opinion, these tests would give a deeper insight into the chemical evolution of the Universe and, possibly, the paths leading to the origin of life itself – because, it has been proved that many biologically relevant molecules, such as amino acids, can be synthesized in outer space on stellar dust specks generated from polycyclic aromatic hydrocarbons (PAH). On Earth PAH are listed among hazardous contaminants and are present in exhaust of any engine operating off hydrocarbon fuel.
"If we succeed in figuring out how PAHs are produced in outer space conditions, how they transition from gaseous to solid phase and generate solid dust specks, we will have a better idea of the origin of life in the Universe", - summed up Alexander Mebel.
For reference
* Molecular cloud is a type of the interstellar cloud whose density and size allow it to produce molecules, normally hydrogen molecules. A molecular cloud may beget stars and therefore it is sometimes referred to as "stellar nursery".
** Silicon carbide is a chemical compound of silicon and carbon. Extremely scarce on Earth and widely common in outer space. It is especially plentiful in dust clouds ("star dust") around the carbon-rich stars as well as in protogenic meteorites.
Photo: Anar Movsumov
Share
Facebook Twitter VK OK