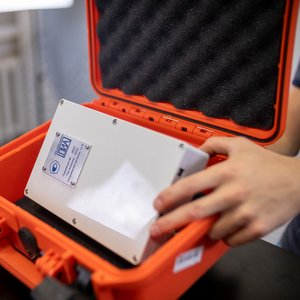 The device will also be useful for ecologists, geologists, and developers

A student of Samara University has developed a mobile analytical unit for the entities of the Ministry of Emergency Situations, allowing to increase the accuracy of arson detection by a factor of about 10 when investigating fire causes. The development will also be useful for ecologists and developers, as it can be used to test soil for the presence of hazardous substances, which is relevant to the development plans for the former industrial areas. A prototype of the device has already been produced and passed pretesting on the basis of the Fire Test Laboratory for the Samara Region.

"Experts usually use gas chromatography to identify the signs of arson, which is the basic method, but the problem is that common gas chromatograph is a rather large stationary device, which means that samples taken at the scene of fire shall first be taken to a laboratory, to this device, and the journey can take several hours, especially if the fire occurred somewhere in remote parts. During this time, the content of the number of chemicals in the samples decreases or may even be reduced to almost zero. As a result, the expertise may be inaccurate. This can be avoided by not wasting time travelling to the laboratory and by carrying out expertise at the scene of fire using a mobile analytical unit" said Alexey Kurepov, the author of the project, a student of the Department of Chemistry at Samara University.

The unit looks like a small but weighty plastic case - the total weight of the device with all accessories, gas cylinders, and a battery is about 10 kg, which means it can be manually carried from the car directly to the scene of the fire. The mobile unit is based on a portable gas chromatograph PIA developed at the university a few years ago, which is compact and has a high sensitivity.

Part of the sample taken, for example, a cotton swab with rinse, soil, or wood particles is placed in a sealed test tube, heated in a special device to 150 degrees, and the components released after a few minutes are sent to a gas chromatograph for analysis. The device determines the composition of these components and compares it with a database of "digital chromatographic prints" of various substances e.g. flammable materials, combustible liquids, and so on. If the "digital prints" match, then there is a high probability that the fire was caused by arson. Then the investigators have to do their part.

"The nominal sensitivity of this mobile unit and the nominal sensitivity of the stationary equipment used in the fire laboratory are exactly the same. That is, both the laboratory device and our mobile unit register the same concentration of substances. However, when transporting samples from the scene of the fire, depending on the distance, up to 90% of the target substances may be lost. If we analyze in the field, there will be no such losses, so the accuracy of detecting signs of arson can increase by a factor of about 10," said Vladimir Platonov, noted an associate professor in the Department of Chemistry at Samara University, the project research manager.

According to him, one of the advantages of this development is that you don't have to be a specialist expert to work with it; an ordinary rescue service employee can perform expertise in the field, after a short course of extra training, of course.

"Now the expertise and interpretation of the results require the involvement of a highly qualified chromatograph specialist working in a laboratory. This is where the device itself will detect, analyze and report the results. In addition, the unit may be used not only for fire forensic analysis but also for environmental monitoring or geological exploration, as it can detect a wide variety of substances. For example, it can be used to test the soil for toxic compounds, which is important when planning residential development on the land plots where industrial enterprises were located before," said Vladimir Platonov.

The device is assembled entirely from domestic components and uses its own software. The prototype has passed preliminary tests at the regional fire laboratory. If certification is successful, the small-scale manufacture of the mobile analytical unit can start as early as next year.

According to the All-Russian Research Institute for Fire Protection of the Ministry of Emergency Situations of the RF, about 13-14 thousand proven cases of arson are recorded every year in Russia. In 2020, for example, there were more than 13.8 thous. fires in the country that were officially determined to have been caused by arson. Due to these criminal fires 227 people died, and the direct material damage amounted to 2.3 billion rubles. A total of more than 439 thousand fires occurred in Russia in 2020; the causes of 10.8 thous. fires, in which 179 people died, could not be established.