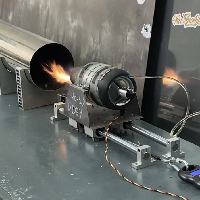 16.04.2021 2021-04-16 2021-04-16
Samara National Research University has effectively tested a small-sized gas-turbine engine (SSGTE)*, designed and manufactured under the new production technology that makes it possible to approximately halve the traditional term for gas-turbine engines to be developed and manufactured.
This engine is a prototype for designing a series of engines running on eco-friendly alternative fuels, including those with hydrogen added. Such SSGTEs can be used on unmanned air drones, and in the energy sector – at the power supply facilities of small settlements, microdistricts, industrial enterprises, shopping centers and hospitals. Earlier, the project on the prototype engine creation was supported by the Innovation Fund of the Samara Region, with 3 million rubles allocated for its implementation.
"At the Institute of Engine and Power Plant Engineering (IDEU) of Samara University, a small-sized gas-turbine engine designed and manufactured by the Institute’s researchers has successfully been tested. The advanced technology of designing and manufacturing the SSGTE developed there will allow creating new small-sized gas-turbine engines in just 18 months, on the basis of mathematical modeling and optimization of the design and production processes of engine parts, as well as due to extensive application of additive technologies", said Vitaly Smelov, the Executive Director of IDEU.
Usually, with traditional technologies, it takes at least three years to develop such an engine "from scratch", , i.e. minimally twice as long. The use of digital coupled counterparts of the product under development made it possible to significantly speed up the design and production processes of the new product. For testing predetermined engine parameters, the virtual test site was used. Researchers have modeled rational parameters of working processes, with special attention paid to processes in the combustion chamber.
"The task of designing a small-sized gas-turbine engine is very relevant and controversial, since when the size of the engine decreases, values of energy conversion efficiency of its components decrease too, and losses in the flow compartment increase. Therefore, created mathematical models of working processes of the engine should be adjusted in light of the small size of the future product", accentuated Vitaly Smelov.
The engine parts (input device, compressor, combustion chamber, turbine and nozzle) were manufactured in the University Laboratory of Additive Technologies, on a 3D printer (SLM280HL selective laser fusion unit), using domestic metal powder compositions. For printing parts, special technological modes have been developed, taking into account how different types of laser beam movement affect mechanical properties of the material synthesized.
"In the course of testing the finished engine prototype, technical parameters were obtained as follows: 120,000 rpm, thrust – 20 kgf. The tests were completed successfully. One of promising areas for applying such SSGTEs is small distributed energy: creation of environmentally friendly low-power gas-turbine drives running on syngas***, produced from biological products and wastes", said Vitaly Smelov.
The small distributed energy segment includes power supply facilities for small settlements, microdistricts, industrial enterprises, shopping centers, hotels, hospitals, etc. Currently, according to the researcher, in our country, on this market, SSGTEs of foreign production, mainly engines of the American company Capstone, are usually used.
As the Executive Director of IDEU emphasized, this project on development of the SSGTE is not only scientific and technical, but also educational, since students actively participated in its implementation. In general, scientists from five departments participated in this project: Department of Aircraft Engine Construction and Design, Department of Aircraft Engine Theory, Department of Thermal Engineering and Thermal Engines, Department of Engine Production Technologies, and Department of Automated Systems of Power Plants.
"This interdisciplinary approach to implementation of projects will be used in major educational programs of IDEU, as it allows involving into science and engineering projects young people with critical and associative thinking, innovative activity and mobility, able to solve non-standard tasks and create samples of new promising technologies", concluded Vitaly Smelov.
As previously reported, Samara National Research University, which is a member of the research and education center "Engineering of the Future", is establishing the Engineering Center for researching in the field of advanced gas-turbine engine technologies, and developing digital intellectual information technologies and innovations in the field of mechanical engineering and energy. For establishing and developing the Center, more than RUB 222 million have been allocated from the federal fund. The Engineering Center of Samara University will work in close cooperation with its strategic partner, UEC-Kuznetsov PJSC, and projects implemented there will become one of key elements of the research program for development of the REC "Engineering of the Future" in terms of technological and educational projects of the Propulsion Engineering platform.
* – Small-sized gas-turbine engines (SSGTEs) are used in experimental aircrafts, unmanned air drones, and power grids. The approximate analogues of the SSGTE developed at Samara University are foreign engines Turbec (Italy, 100 and 655 kW), Turbomach (Switzerland, 130 kW), Elliott (USA, 100 kW), Bowmen (England, 80 kW), Capstone (USA, 30, 60 and 200 kW).
** Syngas (water gas, generator gas) is mainly a mixture of carbon monoxide and hydrogen. In industry, it is produced by steam conversion of methane, plasma gasification of waste and raw materials, and coal gasification.