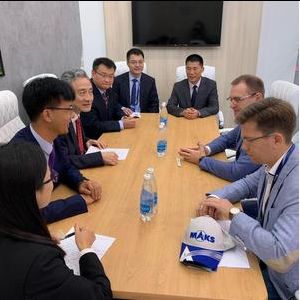 МАКС Богатырев Владимир международное сотрудничество Выставка партнеру Китай
04.09.2019 2019-09-04 1970-01-01
Within the framework of the XIV International Aviation and Space Salon  Samara University Acting Rector Vladimir Bogatyrev and President of Northwestern Polytechnical University of China Wang Jinsong decided to renew the cooperation agreement.
They also discussed the issues of concluding agreements on the joint implementation of the double diploma educational programme in “Rocket Complexes and Cosmonautics” magistracy direction and on the joint holding of summer and winter schools for students from Russia and China.

Samara University and Northwestern Polytechnical University cooperation has been developing since 1993. Among its results there is the organization of a joint laboratory for the development and research of space cable systems, the creation of the Chinese-Russian Research Centre for Aircraft Engine Technology, as well as the annual internships of students, postgraduate students and professors as part of the activities of these joint research units.
Samara University traditionally takes part in one of the world's largest aviation forums and along with other domestic leading companies in the field of aviation and astronautics presents advanced innovative developments of its leading research and engineering centres.
Поделиться в социальных сетях
Facebook Twitter VK Google+ OK